Houzz's survey of more than 3,600 respondents has determined what homeowners and home pros are searching for when it comes to kitchen space. 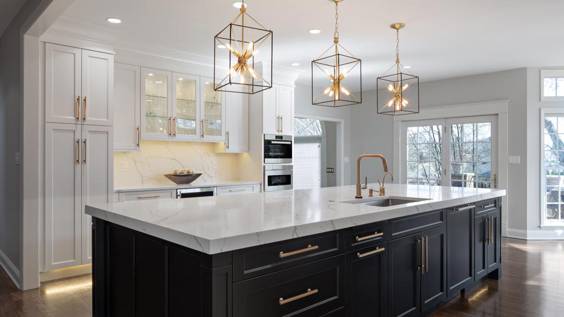 The kitchen is often considered the heart of the home, with family and friends gathering for meals and quality time within that area. It’s no surprise that homeowners and designers want to place an emphasis on quality and comfort when designing these rooms to make them as functional and custom as possible.

Houzz Inc., a platform for home remodeling and design, has released their 2023 U.S. Kitchen Trends Study. The survey of more than 3,600 respondents has determined what homeowners and home pros are searching for when it comes to kitchen space.

Here are some key findings from the survey that can inspire your own home’s kitchen through the year.

A majority of homeowners surveyed are trying to incorporate sustainable options during their kitchen renovations (92%). Many of them chose LED bulbs, energy-efficient appliances, water-efficient fixtures and energy-efficient windows (65%, 61%, 34% and 27%, respectively).

The two top reasons for adding in sustainable choices were “long-run cost-effectiveness” (74%) and making choices that are environmentally friendly (54%).

Creating an open-concept kitchen is on the rise again after a previous dip. Forty percent of homeowners are making their kitchens more open to interior spaces and 20% are making them open to the outdoors.

When opening to the interior, 61% opted for no wall separation, which is down four percent from the previous year. Homeowners opened kitchens to the outdoors by including double doors or a row of doors (46%), a single door (29%) or a pass-through window (14%).

Sticking With the Pros

Hiring experts remains a top choice for homeowners, with 84% working with a pro. Hiring cabinetmakers is up for a fourth consecutive year (32%), but general contractors have the highest demand (50%).

Other categories of hires are kitchen designers (22%), interior designers (15%), architects (11%) and kitchen remodelers (11%). With sustainability having a rise in demand, three percent of homeowners hired dedicated pros to offer advice on eco-friendly designs.

Continuing the trend of past years, 83% of homeowners change their kitchen style as they remodel. Transitional is still the main choice (23%), followed by modern (14%), contemporary (12%), farmhouse (11%) and traditional (11%).

Shaker-style cabinet doors stay in the top spot for kitchens, but the percentage of homeowners picking this style has gone down three points to 61%. Flat-panel doors are trending with 20% of renovators choosing them. For cabinet pulls, bar pulls have a strong lead of 72%, followed by knobs and cup pulls (34% and 10%, respectively). On the other side, six percent of homeowners chose no cabinet pulls.

White cabinets are still the most popular at 40%, followed by wood-toned cabinets, which gained three points to 24%. When choosing contrasting island cabinet colors, blue and gray had slight declines (24% and 15%) while black, medium wood and dark wood were up (12%, 12% and 11%).

Recessed lighting has increased in popularity to take the top spot at 72%, while under-cabinet lights have also gone up to claim second place at 70%. Pendant lights have declined by three points from last year, but they remain the favorite over-island choice (64%).

Bringing electronics into the kitchen has seen an increase in popularity, manifesting in docking stations (up nine points to 49%), wireless speakers (up 11 points to 37%) and stereo systems (up 10 points to 20%). Homeowners are also installing faucets with high-tech features like water-efficiency (24%) and touch-only/touch-free activation (23%). Thirty-nine percent of renovators are also choosing appliances with enhanced features like Wi-Fi connectivity (25%) or smartphone/tablet controls (24%).

While cooking may be the main reason to hang out in the kitchen (and 96% of homeowners would agree), this room can be used for other purposes. Homeowners also eat (71%), bake (69%), entertain (57%) and socialize (46%) here. Working from home is still prevalent as well, with 23% saying they work from the kitchen.