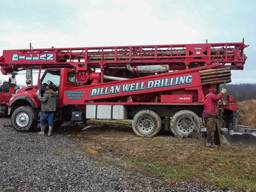 With our Hochstetler Milling log home nearing completion and our certificate of occupancy within our sights, my wife, Becky, and I had a vital component on our checklist still to complete — we needed water.

Since there is no city water available in our rural area of western Pennsylvania, we had to drill a well. Our local driller, Dillan Well Drilling, surveyed our property using divining rods and located an area that showed promise, so they brought up their drilling rig. After approximately an hour of drilling, they struck water at a depth of 60 feet and continued drilling until they hit 140 feet. This gave us an 80-foot pool of water to work with. It took an additional four hours to hook up the electric to the pump and run the piping to the house. The water was tested for bacteria and iron levels and, fortunately, it exceeded all standards by a wide margin.

Now that the water was piped to the house, we sat down with our plumber, Tom Wilson, and developed a scope of work. Our only requirements were to use PEX tubing and install a Manabloc system.

A Manabloc is a distribution manifold with intake and distribution ports. We chose a 12-port ½-inch diameter bloc. Each port is color-coded (red-hot; blue-cold) and has its own dedicated shutoff valve, giving us complete control over the entire plumbing system. From one central location, each plumbing fixture has its own dedicated delivery line resulting in energy-efficiency, cost savings and reduced water waste.

Our second requirement was to use PEX tubing in lieu of copper pipes. PEX allows faster and more efficient water flow, is less expensive and, because it’s plastic, is far more flexible than copper. Since it is less expensive, you can afford to run a dedicated line to each fixture. Because of PEX’s pliability, it’s easily bent, eliminating the use of T-joints and elbows that a copper system would require. This makes for a much faster installation.

In addition, our plumber suggested installing an equalizing tank and a water softener. The equalizing tank will maintain equal pressure throughout the system during usage; the water softener will give us an extra layer of protection against the hard-water deposits and iron build up common with well water.

With potable water running throughout the house, the last piece of the puzzle was how to heat it. Since natural gas wasn’t available and the cost of electricity was so high, we chose propane. Our propane supplier, Reed Oil Company, came out and evaluated the area. To not disturb the beauty of the house and surrounding area, they suggested that we install a 1,000-gallon, in-ground propane tank rather than one that sits above ground. Now with the tank installed and the hot water tank hooked up, we finally have water, putting us one vital step closer to move-in day!

Photo: fotolia.com/IcemanJ / In addition to its flexible tubing, an advantage to the PEX system is that it clearly marks which lines are hot (red) and which are cold (blue).

In my opinion, PEX tubing is the only way to go because of its versatility, color coding, ease of use and cost effectiveness. It also makes for a much faster installation and easy maintenance, which will save you money in the long run.

See all of Becky and Gary's log home journey here.