Some considerations to keep in mind when selecting the wood species for your log home, plus the details on 23 common species choices. 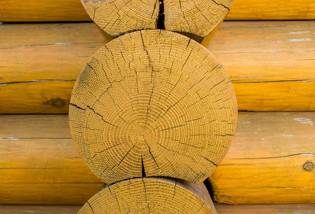 One of the first questions that occurs to people who contemplate buying a log home is "What kind of wood is the best to use?" There is no one correct answer to that question because quality log homes can be built successfully from many different wood species. Wood has many different characteristics. Which species is best often depends on which of these characteristics you consider to be the most important.

The characteristics of wood that generally concern log home buyers are appearance, resistance to decay, insulation value, cost and stability--that is, how much shrinking, twisting, warping and checking the wood is likely to experience over the years. Log home producers share consumers' concerns about these characteristics. They also have to take into account other factors when determining which wood to use. These additional considerations include the availability of the particular species in commercial quantities and the ease with which the wood can be cut and shaped into building logs. Given all the variables that affect the selection of wood species, you can understand why it is so difficult to single out one species as "the best." A good starting point in evaluating wood is to review the characteristics that both consumers and producers most frequently mention as important.

The appearance of wood on the exterior of a log home will change with time due to the effects of weathering. Application of certain wood preservatives also can cause changes in the appearance of wood. The best wood for you in terms of appearance will depend solely on your personal taste.

The following listings provide the R-value of each species of wood. Note, however, that the difference between the species with the highest and lowest R-values is only fractional. As the section on [energy efficiency loghomes/engineering/energy.html] points out, R-value is only one consideration in evaluating the energy efficiency of a log home.

The tendency of a wood to shrink, twist, warp and check is a valid concern for both consumers and producers. Fortunately, it also is a factor that can be controlled by various producers through good materials-handling techniques. As an example, a wood that tends to shrink can be kiln-dried or air-dried, thus controlling this characteristic. Also, through careful grading of the wood, those logs with an inherent tendency to twist or warp can be identified and rejected. Therefore, the instability of a particular species can be overcome in many cases through good materials selection and management procedures.

The price paid for different wood species can be significant. Some wood, such as Northern white cedar, is expensive because it is a slow-growing species and is difficult to harvest in commercial quantities. Other wood, such as Southern yellow pine, is less expensive because it is a fast-growing species that is sufficiently available in commercial quantities in many of the Southeastern states.  The following listing provides information on the basic characteristics of the wood species most often used for log homes. Also included are comments from the companies that offer different species as to the general suitability of the wood for use in a log home. This information will go a long way toward helping with the often difficult decision of which wood to select for your log home.

Here, some details on the 23 most common species to keep in mind:

Atlantic White Cedar Chamaecyparis thyloes
Common names: Juniper, Southern white cedar
Grown: Near the Atlantic Coast from Maine to northern Florida and westward along the Gulf Coast to Louisiana. Strictly a swamp tree.
Harvested: Primarily in North Carolina and along the Gulf Coast.
Characteristics: Heartwood is light brown and highly resistant to decay. Sapwood is white or close to white and usually thin. Lightweight, soft, low in strength and shock resistance. Shrinks very little. Easily worked and holds paint well.
Approximate R-value per inch: 1.41
Suitability: Generally considered one of the finer grades of wood, not as readily available as Northern white cedar.

Northern White Cedar Thuja occidentalis
Common names: Aborvitae, cedar.
Grown: From Maine along the Appalachian Mountain range and westward through the northern Great Lakes states.
Harvested: Primarily in Maine and the Great Lakes states.
Characteristics: Similar to Atlantic white cedar
Approximate R-value per inch: 1.41
Suitability: Generally considered by many producers as one of the finer grades of wood. A premium priced wood available only in smaller diameters in the East.

Douglas Fir Pseudotsuga menziesii
Common names: Red fir, Douglas spruce, yellow fir.
Grown: Pacific Coast to the Rocky Mountains, and from Mexico to central British Columbia.
Harvested: Oregon, Washington, California, Rocky Mountain states.
Characteristics: Sapwood narrow in old-growth trees; may be as much as 3 inches wide in second-growth trees. Varies widely in weight and strength depending on where harvested. Moderately decay resistant.
Approximate R-value per inch: 0.99
Suitability: A very strong wood. Beams cut from this species can span greater distances than many other woods. Also said to be less supportive of mildew and fungus than some other woods.