Before and After: A Log Home Renovation in Michigan

See the before and after photos of this inspiring log home renovation in Michigan’s Upper Peninsula.

An aerial view of the home and land — pre-renovation.

When the Paquins first laid eyes on the home in 2011, the log shell was in great condition.

The kitchen area goes from a blank slate to a gourmet’s delight.

The Paquins get ready to start the kitchen renovation. Some of the log walls will be hidden behind drywall to support the cabinetry, but the benefit is added color and visual contrast.

Their creative vision and sweat equity created the cozy retreat they enjoy every chance they get.

The house was a log shell when Ray and Patti purchased it in 2011.

In Phase II of the reno, the basement is transformed into a full-level master suite.

The home's main bathroom features an heirloom mirror. It was a wedding gift Patti's parents received more than 65 years ago.

A guest room in the Paquins' renovated log home.

It started with a doorbell. In 2008, Ohio resident Patti Paquin purchased a bronze moose-themed doorbell plate as an anniversary present for her husband Ray. The gift came with a note: “For our future log and timber frame home. Now we just have to build the rest around it.”

Ray and Patti had been reading Log Home Living for more than a decade, saving their issues and flagging home features they liked. Their plan: To build a log and timber vacation home which, someday, they’d enjoy full time in retirement. Natives of Michigan’s Upper Peninsula, this is where they wanted it to be, both because of the breathtaking waterfront scenery it affords, as well as proximity to their family.
By 2011, they’d even begun discussions with a project manager on a hybrid design. But after enlisting the services of a real estate agent to help them find a suitable waterfront lot in the U.P., their plans took a detour when opportunity chose to knock instead of ringing that bell. During one of their online searches for land, they stumbled upon a log house in Iron Mountain, Michigan, that appeared to have many of the elements they were seeking — particularly its 3-acre lot with 270 feet of lake frontage. Buying an existing structure wasn’t part of their plan, but this place was intriguing. It was a log shell that was nearly unfinished inside.
This interior blank slate would enable the Paquins to configure it to their liking. So they called their agent and planned a quick visit between Christmas and New Years — no small feat in the wild winter weather of the Great Lakes region. The couple fell in love at first sight and abandoned their idea to build from scratch. By February 2012, plans to renovate and finish the house were underway. Ray and Patti were lucky that the structure’s pine logs were in excellent condition. 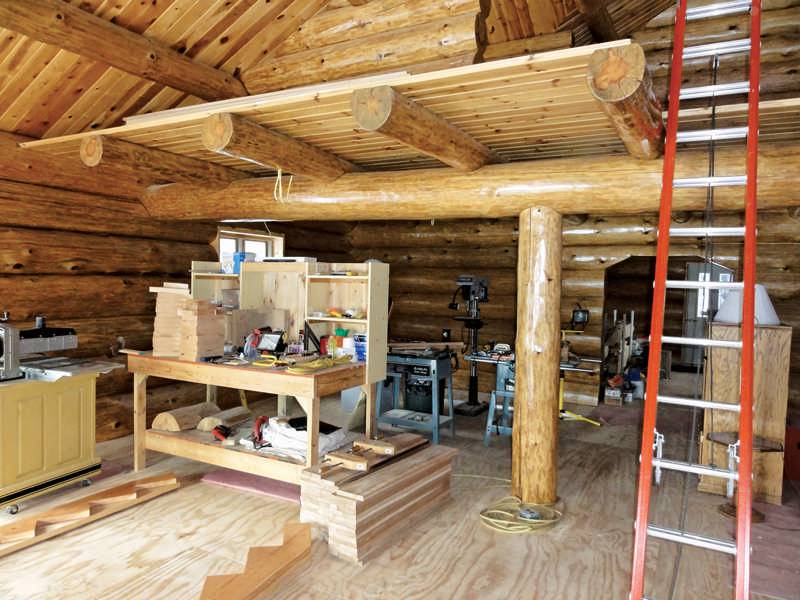 As it happens, the house was a pet project for Bob Tedeschi, the original owner/builder who had been working on it as time allowed. But other business ventures took precedence, and Bob decided to sell the place before he finished it. When the Paquins purchased it, the cabin was dried in, but had no electricity or plumbing on the log level. The basement, which served as Bob’s apartment as he worked on the house, was outfitted with utilities.

The challenge, now, was how to convert the wide-open log level into the functional space Ray and Patti wanted. The house was blessed with two fireplaces faced in fieldstone, including one in the soon-to-be great room. So the Paquins turned their attention to the kitchen. Enlisting the help of Lowe’s designer Russ Snyder and tapping into Ray’s computer prowess, they drafted its layout, thoughtfully incorporating elements of stone and logs they’d take from the property. Starting here helped them think through how the HVAC, plumbing and electrical lines would be run.
Being handy himself, Ray wanted to be involved in the renovation as much as he was able from his home in Ohio, but he also knew when to call in the pros. After interviewing four contractors, he hired David Bloomquist of DLB Construction in Iron Mountain to demo the few areas that been underway on the main floor, frame-in the new interior walls and install the pipes and wiring. In every aspect, Ray served as his own general contractor, overseeing subcontractors from afar.
This can be tricky, as sometimes subs rank projects based on their ability to get ongoing work from a professional G.C., pushing owner/builders down on the priority list or hastily finishing a job so they can move on. Thankfully, this was not the case for Ray.
“I was very fortunate that we didn’t run into any issues with the subs,” he admits. “I carefully chose people who I thought would deliver, and they did.” 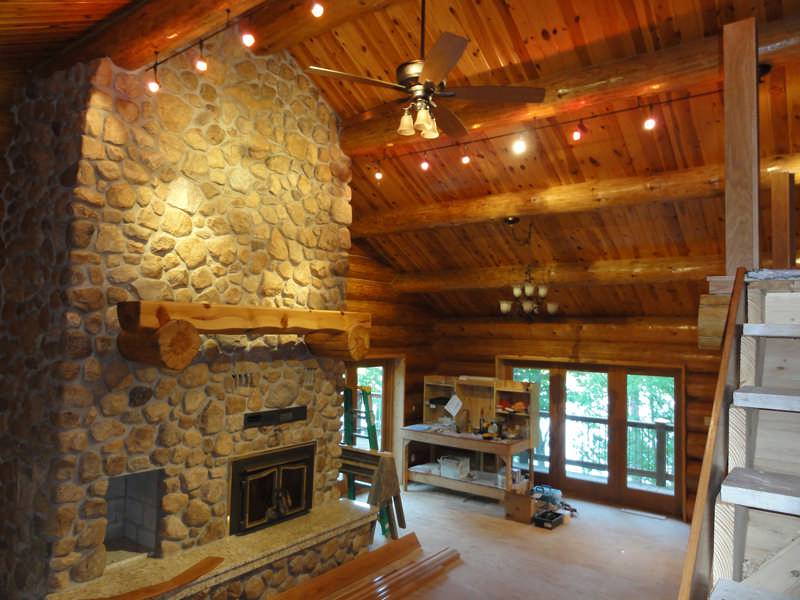 By April, the Paquins’ vision for the home was starting to take shape. Framing in the foyer, including partition and knee walls, was erected, as were supports for the kitchen cabinetry, though it meant hiding a portion of the logs.

“The cabinets were a way to introduce color to the room,” Ray says.
Drywall, which David meticulously coped to fit each of the round, handcrafted logs, was hung. Over the summer the kitchen’s countertops and backsplash were installed, the bedroom and bath were finished and the relocated staircase leading from the basement to the loft was secured.
By Labor Day, the log-level reconstruction was complete, and the whole family eagerly gathered in their new lakefront getaway for the holidays. However, Ray’s reno wasn’t quite over. “Phase II,” as he calls it, involved converting the basement level where original owner Bob Tedeschi stayed during log erection into a luxurious master suite. A kitchenette was transformed into a butler’s pantry and coffee bar.
The second fieldstone fireplace, which was unfinished when Ray and Patti bought the house, was given a fresh face and topped with a granite hearth. A minimalistic but functional bathroom was reconfigured into a spa-like space that turned the tiny existing shower into an oversized aqua-haven. The washer and dryer, which had been part of the original bathroom layout, were relocated to the other side of the wall and elevated on a platform so the front-loaders would be more easily accessible.
Then an enormous walk-in closet was framed around the machines — an ingenious design decision that makes short work of putting laundered clothes away. The rest of the level is wide open, consisting of spacious sleeping quarters, a relaxing sitting area by the fireplace and a dedicated space for a desk. Throughout the suite, Patti and Ray designed and built recessed niches and integrated storage that keep the room organized and create decorative interest. Renovating this lower level took nearly a year, as these weekend warriors performed much of the work themselves while subcontracting the heavy lifting to local Dickinson Home builders. 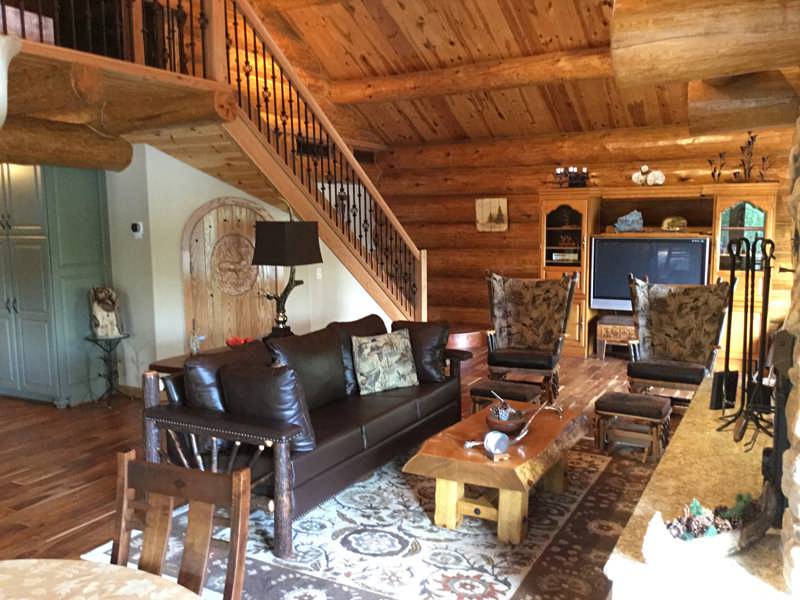 The home now consists of 2,992 square feet of finished living space — 1,552 square feet on the main level, 540 in the loft and 900 in the lower-level master. Ray feels his log home renovation went smoothly, but that’s not to say it was without its challenges.

“One of these was with every ventilation situation, like in the kitchen and bathroom, where we were faced with venting either through a log wall or the roof. We didn’t want to do either,” he explains. “But with careful planning and discussion with our contractors, we found an alternative, taking the ventilation through a wall, into the basement and then out through the foundation. This enabled us to keep the exterior log walls and roof clear of pipes and vents.
“We had a recent visit from our Realtor,” Ray continues. “He told us that the most difficult part of selling this unfinished log home was its lack of floor plan – it scared off a lot of potential buyers. Honestly, that wasn’t a concern for us. We started having ideas the minute we walked in. We’ve relocated multiple times and bought many different homes. We loved the DIY aspect and saw this as just another project, albeit our largest. I will say that I did underestimate this one a bit, but some of that was a result of the clean-slate approach we took — if a better idea presented itself, we’d change direction on the fly. We set a budget at the start, but that evaporated early on when we decided to get exactly what we wanted the first time around and not shortchange ourselves.”
Ray estimates that by doing a lot of the work themselves, they saved about 10 to 15 percent on labor, but they reinvested that savings into high-end materials like travertine tile and hand-scraped wood floors. He and Patti haven’t regretted those decisions, and they’ve never looked back.
“A key to our success was carefully selecting a team of contractors that were as creative and adaptable to change as we were. Patti and I have been a great team for 39 years. We would do this all over again.”
Now the fateful doorbell that started it all proudly greets friends and family to the Paquins’ perfectly renovated log cabin retreat.


See also: The Keys to a Log Home Renovation