Step Inside an Architectural Masterpiece in Montana

Minnesota natives head to Montana’s Big Sky country, and their one-of-a-kind log home, every chance they get. The Triple B Ranch glows with warmth as dusk subtly begins to cloak southern Montana. Construction materials were sourced locally, including the reclaimed wood used throughout the home. 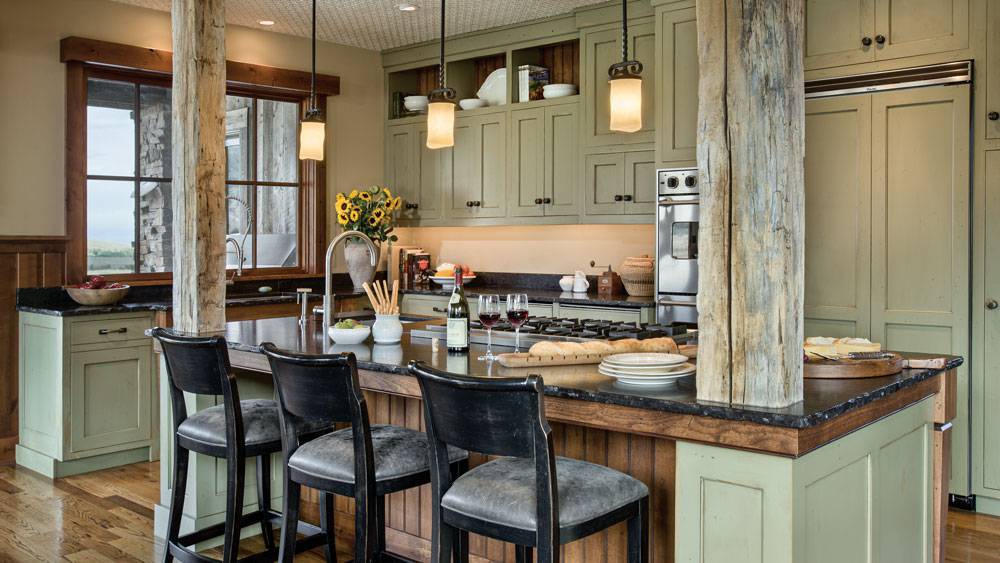 The spacious kitchen features poplar cabinets painted sage green, an appealing accent to the rustic reclaimed timber columns. The flooring is also reclaimed — crafted from American chestnut sawn from old timbers and laminated to provide a product that would perform well when installed over the home’s in-floor radiant heat. 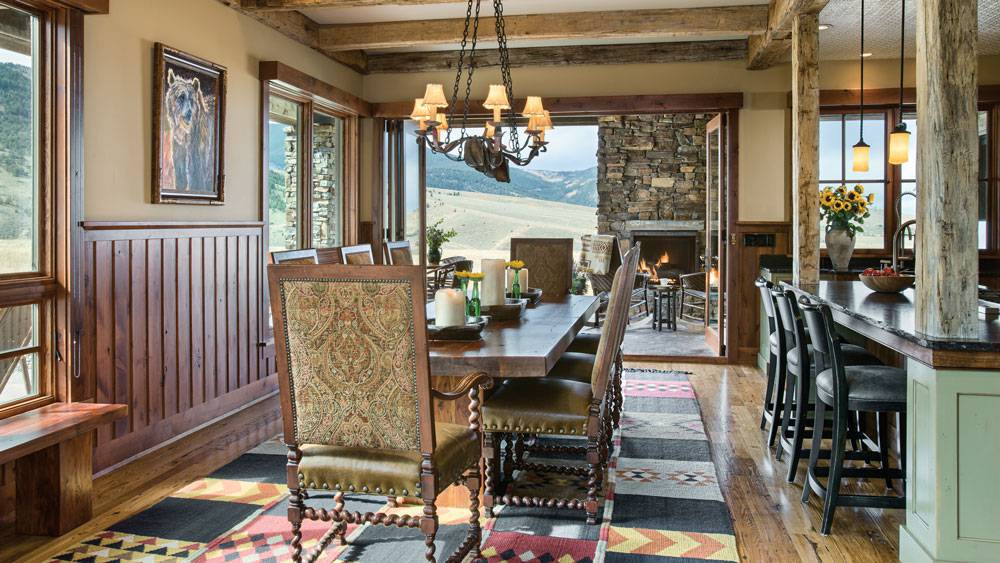 The dining area is just steps away from the kitchen’s prep space. Wainscoting was applied to the dining room walls to give the room its own distinct identity, while French doors swing wide to a patio and fireplace for more casual fare. 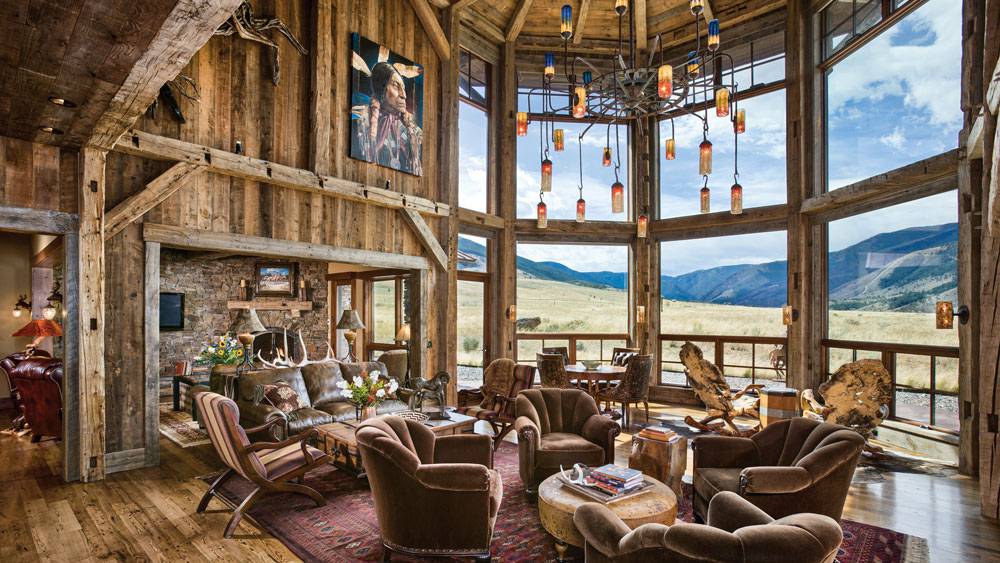 The great room’s 26-foot-tall ceilings enhance the full expanse of the reclaimed timber beams and show off the craftsmanship of Dan Kyro and his artisans at Timberline Builders. The use of ambient light is complemented by a spectacular chandelier with custom metal work by Ira Cuelho, incorporating an old agricultural wheel and blown glass shades by Ona Magaro. 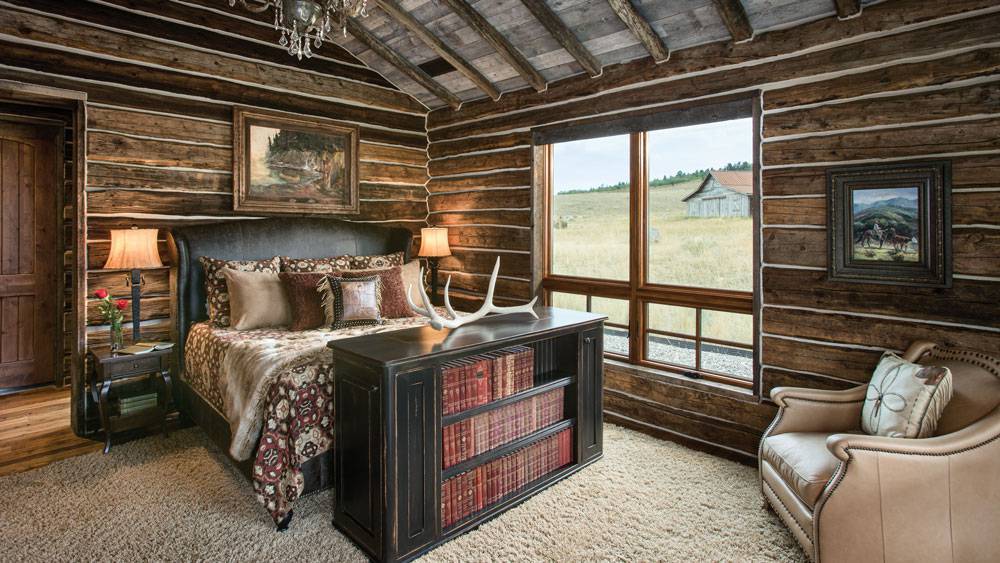 The master bedroom exudes comfort in a most unusual setting. Situated to take in the view of a distant barn and the open meadow, the room is actually built from an old, once derelict one-room log cabin. The logs were unstacked, split and reassembled as the master bedroom, which has the look and feel of a log cabin but is fully contained within the overarching structure of the home. 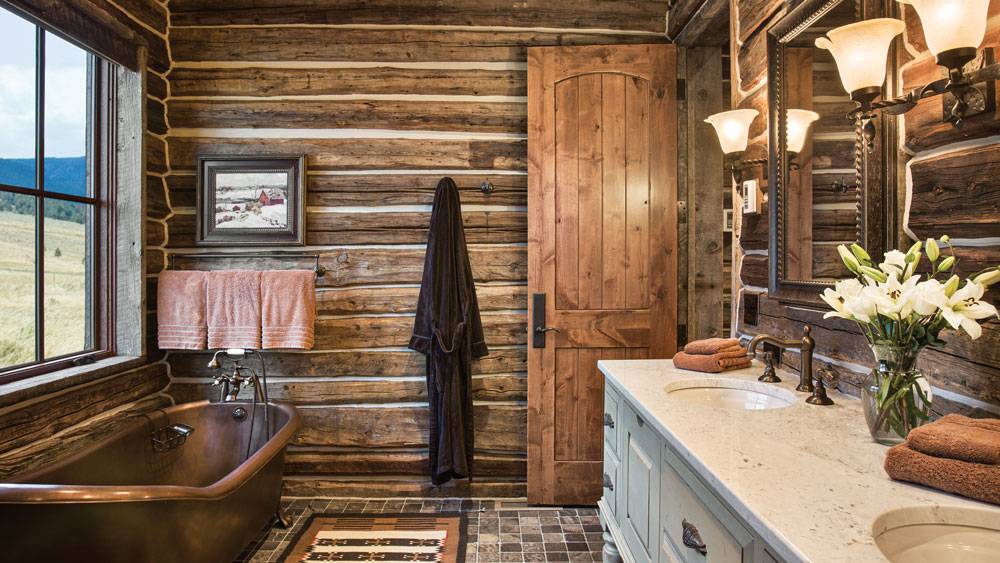 Rustic yet luxurious, the master bath includes a freestanding copper tub, ample lighting, log construction that carries over from the master bedroom and reveals the chinking of the original cabin structure. 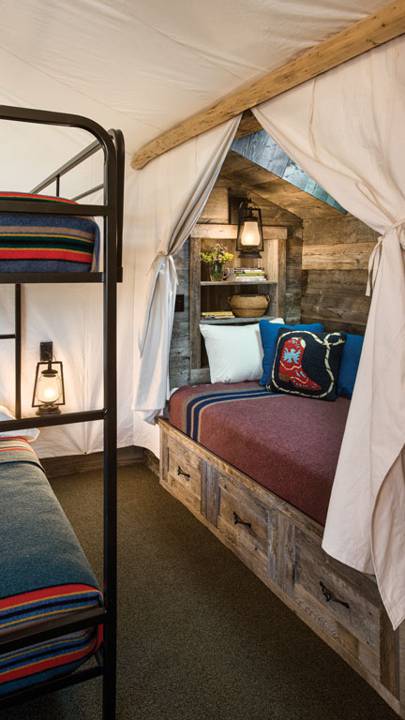 The tent room adds an element of whimsy and adventure for imaginative guests. The space is completed with bunk beds, perfect for grandchildren and other young visitors, as well as lantern light fixtures that offer a feeling of outdoor life with the convenience of indoor amenities. 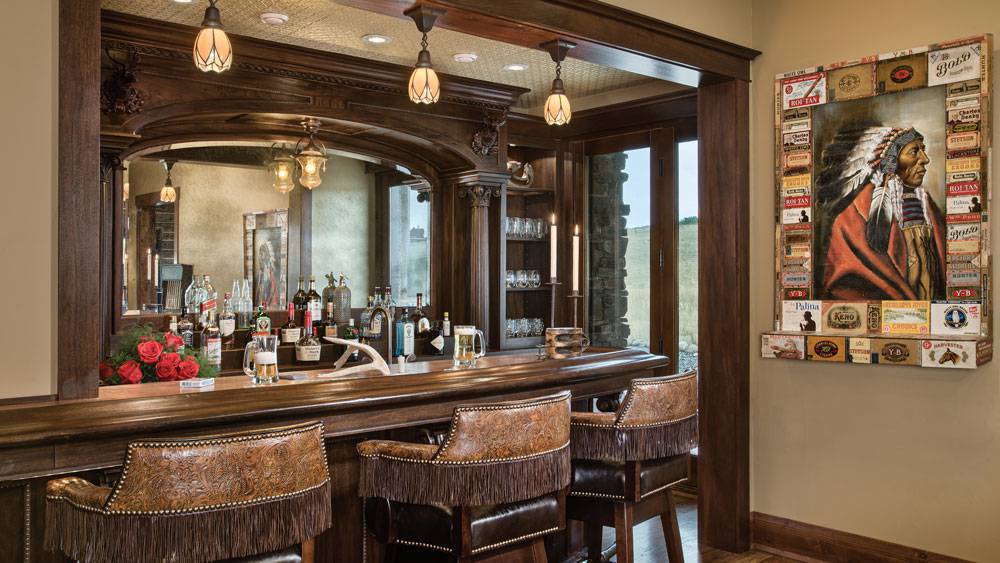 Architect Andrew Porth enjoyed working with local furniture builder Nick Kosorok to complete the design of the inviting mahogany bar. The wood was chosen to be consistent with the species that would likely have been used in an antique bar of such design. Similar examples are often seen in local watering holes around the town of Red Lodge. 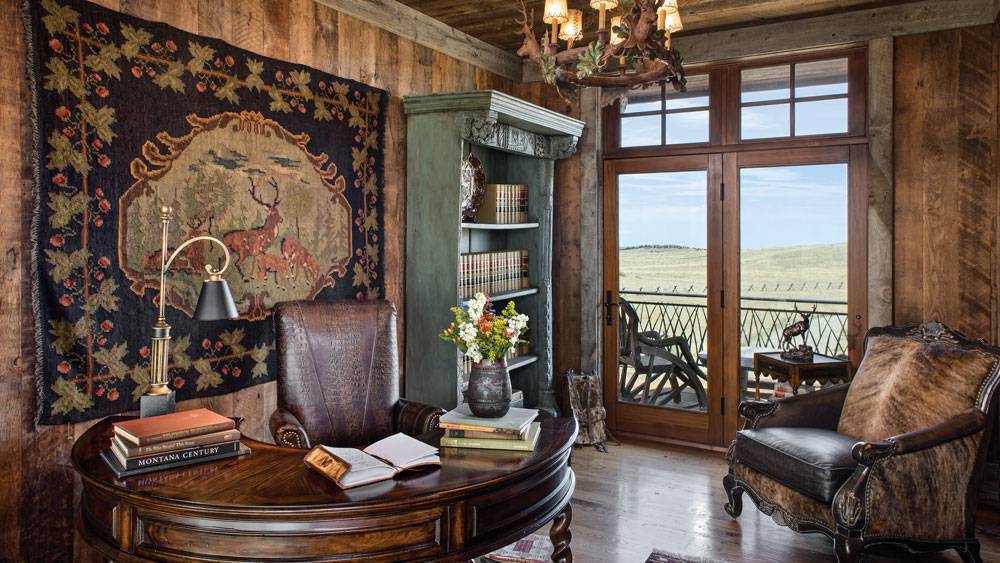 The relaxing study at Triple B Ranch features specially made doors that allow ambient light to flood the interior along with easy access to adjacent outdoor space. The light fixture adds a surprise element with its combination of shaded illumination and wildlife, complemented by the large wall tapestry. 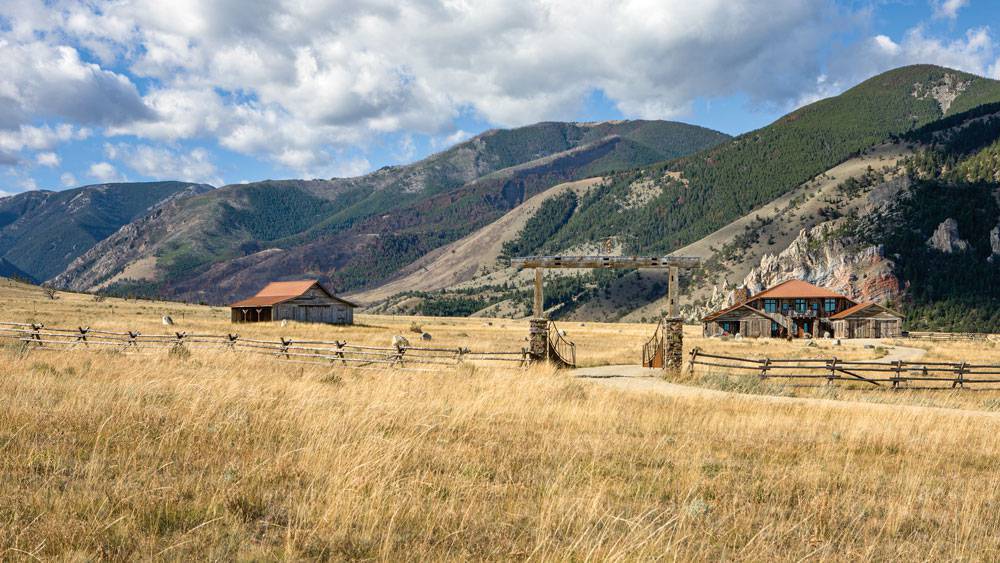 The breathtaking panorama of the Meeteetse Meadows merging with the surrounding Beartooth Mountains provides the perfect setting for the Triple B Ranch, home to the Butzer brood. “We wanted our family to have the opportunity for a wonderful mountain experience, and we found that here in the northern Rockies,” says Bart.

The Triple B Ranch glows with warmth as dusk subtly begins to cloak southern Montana. Construction materials were sourced locally, including the reclaimed wood used throughout the home.

Written by Adam Headley
Photography by Roger Wade
In the midst of the Meeteetse Meadows, Triple B Ranch rises like a golden sun against Montana’s Big Sky.  The soaring Beartooth Mountains ascend in the distance, and the town of Red Lodge, lies literally “next door to the great outdoors.”
For Bart and Betsy Butzer, the transition from primary residence in the Midwest to their western mountain getaway is easy, and they travel from Wayzata, Minnesota, to Triple B Ranch at least once a month. “Thirty-seven years ago, I was managing the store in Billings, Montana, and we drove up to Red Lodge and spent time here,” remembers Bart, a retired Target executive who once ran the company’s retail operations from coast to coast.
“When we retired, we started looking for a place here in Montana, and we came back to Red Lodge,” Bart continues. “We’d looked for houses and just couldn’t find what we wanted, so we decided to build. Construction on the Triple B Ranch began in 2007, and the home was completed in 2009.”
The result of the Butzers’ two-year construction journey stands as a masterful blend of form and function in 5,200 square feet of living space. Nestled on 25 acres of expansive meadow, the home offers 270-degree views of the surrounding Beartooth Mountains, crowned by Mount Maurice, which towers 9,255 feet above sea level. The ranch is a mere hour’s drive from the north gate of Yellowstone National Park. And the name “Triple B”? Well, that came easily. The Butzers are parents of three grown sons, so Triple B stands for Bart, Betsy and the Boys. 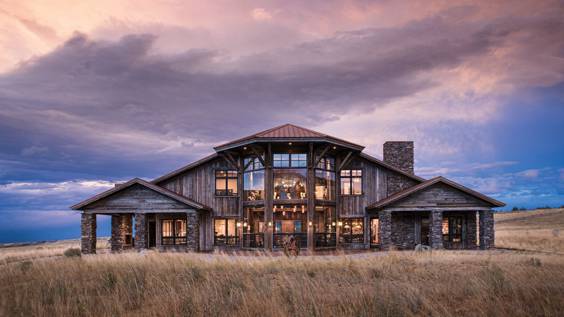 The home’s design was influenced by the William G. Low House, a shingle-style seaside cottage designed and built to the specifications of the legendary New York architectural firm of McKim, Mead & White. Located in Bristol, Rhode Island, the hallmark of the Low House was its 140-foot-long gable, creating a bit of a mountain aesthetic on its own. The Low house was completed in 1887 and claimed by the wrecking ball in 1962.
In pursuit of that homage to the Low House, as well as designing the ideal family space of their own, the Butzers assembled a professional dream team. Architect Andrew Porth of Boise, Idaho-based Porth Architects, Dan Kyro of Timberline Builders in Red Lodge, Montana, and Jeremiah Young of Kibler & Kirch in Billings brought their skills in architecture, construction and interior design to the table, while Mike Halverson and Montana Reclaimed Lumber in Gallatin Gateway, Montana, supplied the reclaimed wood of various types used throughout.
Andrew vividly remembers the Triple B Ranch experience and considers the collaborative project a triumph. “I couldn’t be happier with the result,” he remarks. “The biggest challenge we faced was taking a large and very diverse client wish list and fitting it to a form that was able to contain all the stories that the owners wanted the structure to tell. Each room is quite different from the next, which is very different from a typical house for us, where we would apply the same detailing to every space.
“Our earliest designs were collections of different volumes, each of which housed a few spaces, but none of which was particularly tall,” Andrew continues. “When the owners commented that they weren’t seeing the height they had hoped for in the living room, I had a sort of ‘light bulb’ moment and decided that the thing to do was collect all of these different spaces under one broad roof form, kind of like a circus tent.” Andrew refers to this as the “big tent” house, not only for the literal tent within the bunk room, but for the way all the different spaces are brought together into one fairly simple volume. 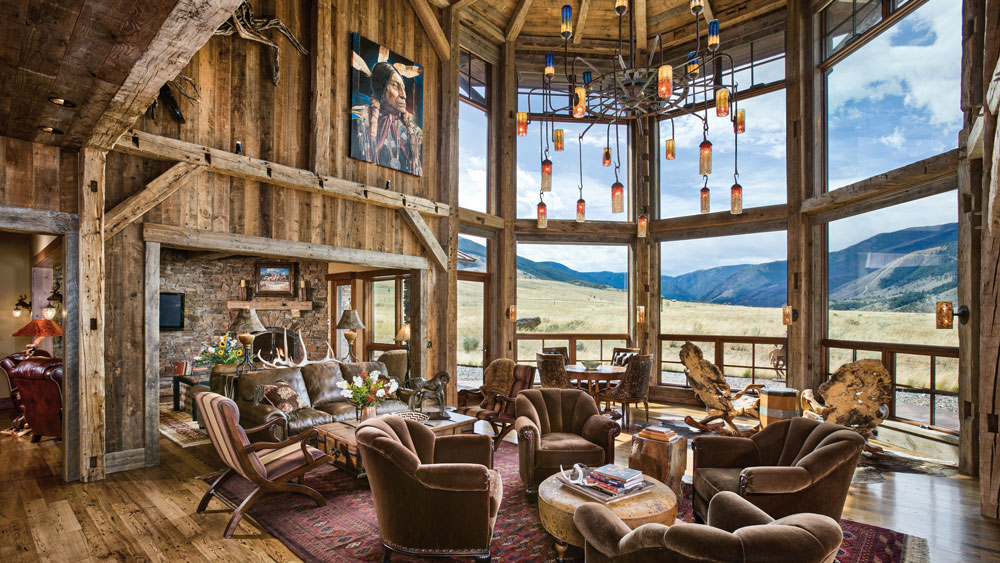 Mike Halverson’s talent for finding just the right reclaimed wood, from character to color to grain, is readily apparent in the ranch’s structure. Much of the heavier timber consists of a variety of hardwoods from old barns in the eastern and midwestern United States, while the joists were repurposed from the bones of an old pea canning facility in northern Idaho. Exterior siding and interior wall paneling were fashioned from weathered and perfectly aged corral board.
“The timbers were probably handmade by a craftsman in the 1850s to 1880s,” Mike shares. “Here they are being used in a structure that will last another 200 years, which is awesome!”
“Three things come to mind with using reclaimed wood,” he adds. “First, there’s the recycling aspect and sustainability. Second, the finish and aesthetic can’t be truly obtained with new wood. Stability is third. Reclaimed wood is not going to move around. It has thoroughly dried.”
According to Andrew, the richness of detail and quality of execution stand out, and at Triple B Ranch these elements are common to interior spaces that are quite varied. “It takes a committed and trusting client to achieve this kind of result,” he says. “It is also rare that one gets to design for such an exceptional location.”
The Butzer family agrees. Triple B Ranch is a tour de force, a fusion of aesthetics and purpose. “We got a great architect in Andrew,” Bart reflects, “and we wanted the reclaimed wood from Mike Halverson. Dan had all the equipment to handle the wood, shaping and cutting it and making the big beams for the living room, and Jeremiah brought wonderful creativity and thought to the interior.”
Triple B Ranch brings diverse perspectives together in magnificent harmony and makes the spirit soar from meadow to mountains.