Nearly three decades in the making, this tiny forever home in New Hampshire is nothing short of perfection.

A low-maintenance log cabin is the ideal fit for retirement life, according to homeowner Charlie Hurley. A pair of rocking chairs, wildlife-themed fixtures and some colorful hanging plants add character to the front porch. A well-placed overhead fan offers a reliable breeze during porch sitting spells.

To help the compact interiors live large, the Hurleys added a truss roof structure and extended the 8-foot ceilings to cathedral ceilings. They also increased the functionality of the home for their lifestyle, moving the front door and adding a coat closet.

To make their preferred bed placement work, the owners decided to forego a traditional casement window against one wall, opting instead for an awning window placed higher on the wall. The clearance accommodates the headboard.

A simple Paver patio off of the kitchen provides a peaceful spot for casual Outdoor dining.

A low-maintenance log cabin is the ideal fit for retirement life, according to homeowner Charlie Hurley. A pair of rocking chairs, wildlife-themed fixtures and some colorful hanging plants add character to the front porch. A well-placed overhead fan offers a reliable breeze during porch sitting spells.

Written by Suzanna Logan
Photography by Roger Wade
For nearly 30 years, just off a two-mile-long stretch of dirt in scenic Enfield, New Hampshire, a gravel road branched off the main thoroughfare, continued a few hundred yards and arched over a brook to … an empty field.
This road to nowhere came about in 1988 when Charlie and Deborah Hurley bought the 22-acre property with plans to build a log home. But after putting the driveway in place, they decided to press pause on the project and wait until retirement to build. For the next two decades, they saved and planned — and set up camp on the land with their RV every now and again.
Finally, in 2016, Charlie retired, and 28 years after installing the road, the couple was ready to embrace log home life. With plans to make this their forever home, the couple knew that a sprawling, oversized house wouldn’t do; they made plans to build a cozy cabin instead. After checking out a number of companies at log home shows, the Hurleys selected local producer Coventry Log Homes. From the company’s stock plans, the couple chose a modest, two-bedroom, one-bath layout called “The Westport,” adding two feet in width and four feet in length to the design, along with a walk-out basement.
Getting everything the couple needed into 936 square feet of living space was a bit of a challenge but worth the effort, according to Richard Titorenko, the Coventry Log Home representative who spearheaded the project. “It’s not a huge house, but not everyone wants 3,000 square feet,” he says. “When you’re building small, it’s important to narrow down what’s important to you.” Charlie’s response? “It’s just the two of us, so we wanted something comfortable and affordable.” 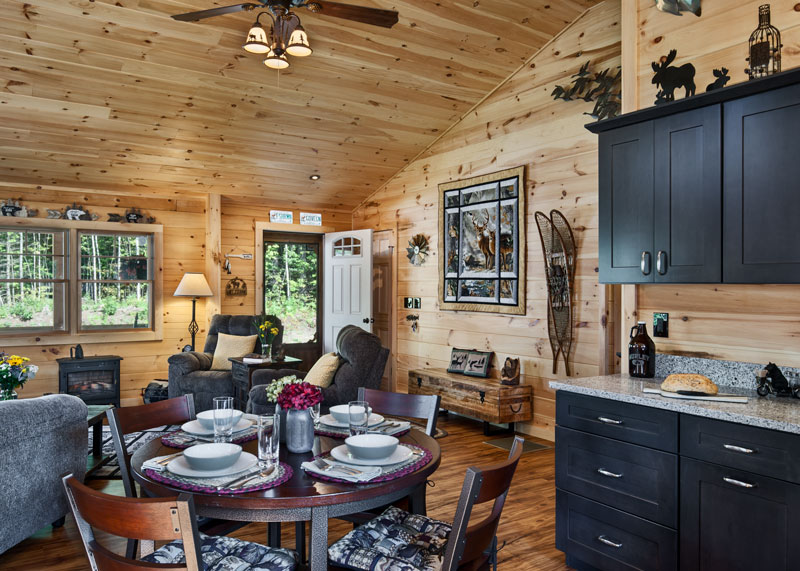 Though the footprint is compact, the home has everything the couple needs for laid-back log home living. An open-concept layout helps the kitchen, living and dining area live comfortably, while a second bedroom used as an office with a couch gives the couple an additional space to retreat.
But it’s the wide open spaces outside of the home where the couple spend most of their time, weather permitting.  A farmer’s porch spans the length of the house, inviting the Hurleys to sit a spell whether it’s to enjoy steaming cups of coffee in the early morning hours or a sun-painted sky in the evening.
When they’re not at home, you can usually find Charlie fishing or boating just down the road at Grafton’s Pond, a placid 200-plus acre lake with 29 islands. “It’s a kayaker’s paradise,” he says. Deborah’s daily outdoor excursions include five to seven mile nature walks. “It’s like you’re in the Canadian wilderness here,” Charlie says.
Though Charlie admits retiring to a rural 22-acre parcel of land after a busy life in the city has taken “some getting used to,” he has come to expect a different kind of excitement these days: “Every morning, you wake up and take a look out the window never knowing what you will see. It could be a flock of turkeys in the driveway or a moose walking by. Or it could be a black bear or a bobcat. There’s always something new.”