This Colorado Home Has Good Bones for Renovations

A couple renovates an early-1980’s log home built on the banks of Colorado’s trout-rich Taylor River. 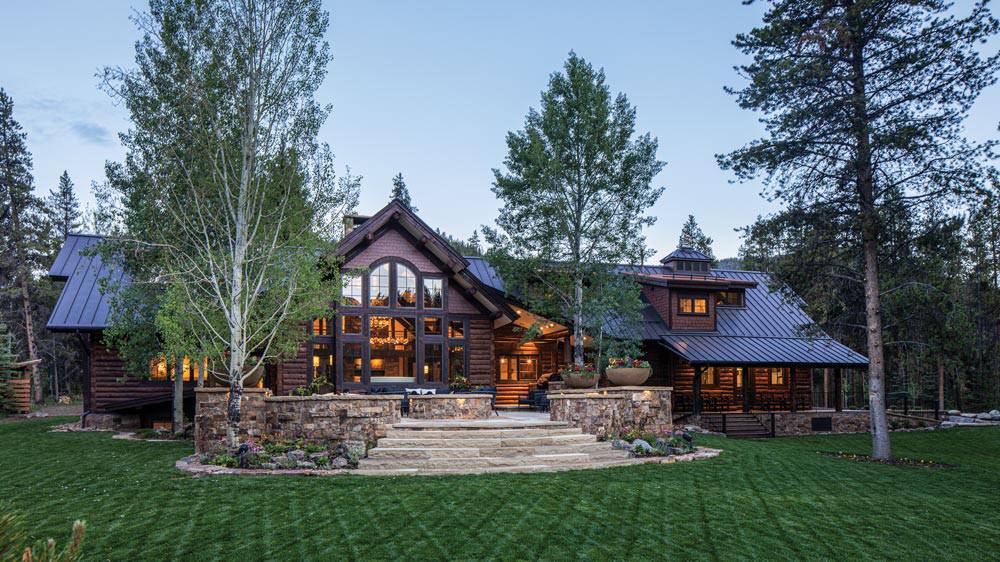 The new timberframed entryway ensures guests know exactly where the front entrance is. The eaves were painted white to match the white-washed interior walls.

The dining area of the great room overlooks the water, while the grand piano, tucked away in the corner, fills the room with dinner music during gatherings. Steel-and-glass cabinets were handmade by a local metal shop. At the rear is a double-doored Sub-Zero refrigerator and a Wolf stove with a whisper-quiet Vent-A-Hood. This kitchen earned third place in a regional Sub-Zero design contest for interior designer Kori Keyser.

The great room’s fireplace had to be rebuilt, as the original’s mortar was crumbling. The wing chairs were created by bespoke furniture specialists  (gemupholstery.uk). 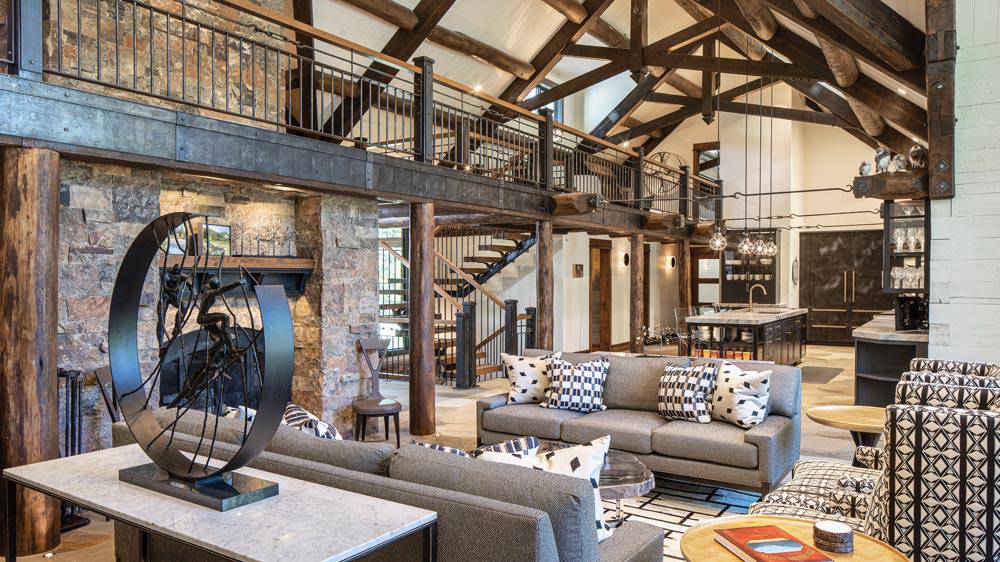 The scissor trusses were stained a deep brown and the walls were whitewashed for contrast. The handblown glass chandelier was crafted by a local artisan in Crested Butte. 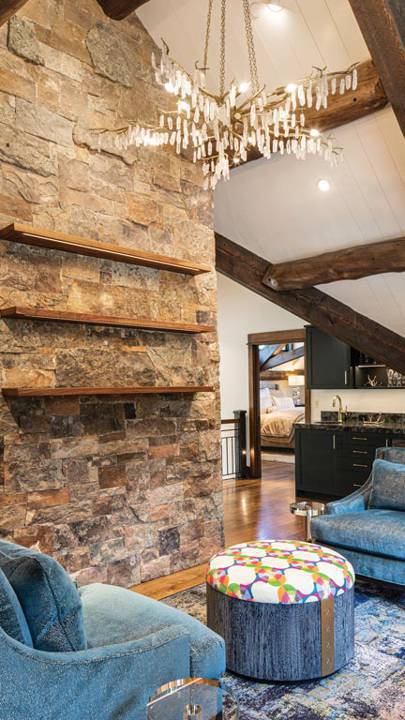 The upstairs loft includes this sitting area with wing chairs and a vintage Kravet ottoman by the rebuilt chimney. Laurie’s painting studio can be found just on the other side of the chimney. It features a handmade easel that accommodates a myriad of sizes, shapes and angles for any size painting. 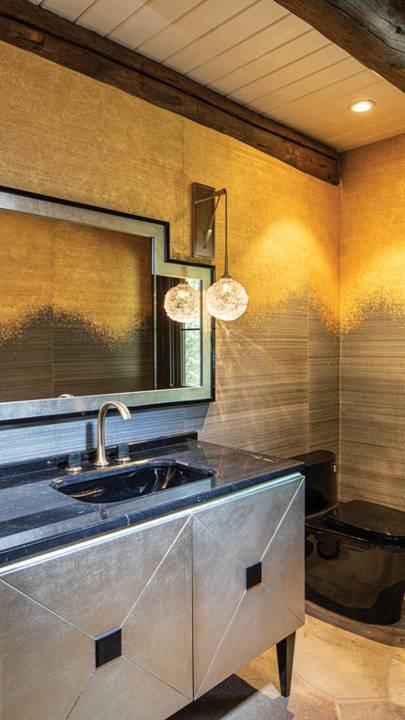 A burst of gray and gold ombre wallpaper, along with the silver-fronted vanity, makes this half bath glitter. 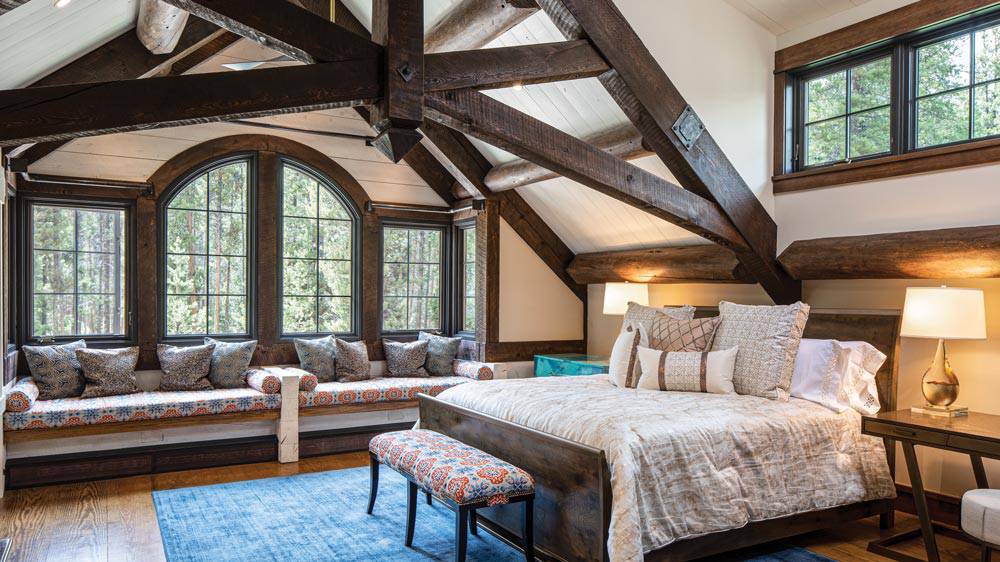 Kori designed this whimsical bedroom for adults, with two cozy bunks at the foot of a spacious king-sized bed and matching divans under the large, arched windows. Here you can get up close and personal with the home’s gorgeous scissor-truss system.

Kori designed this whimsical bedroom for adults, with two cozy bunks at the foot of a spacious king-sized bed and matching divans under the large, arched windows. Here you can get up close and personal with the home’s gorgeous scissor-truss system.

Homeowners Laurie and Steve recently celebrated their 39th wedding anniversary. While Laurie was raising their two sons and working as a nurse, Steve was chasing success in the satellite-radio industry, up and down the dial, from city to city. But regardless of where they lived, Steve always pursued his longtime passion for fly-fishing for trout.

Laurie says that among their circle of friends, Steve is incredibly respected as a fisherman’s fisherman. “He ties his own flies. He can go out on a river all day, from sunup to sundown, never a thought about eating or drinking. It’s his happy place,” she says.

What Laurie didn’t realize, however, was that Steve, who was approaching retirement, had plans to take his favorite pastime to another level. He had been quietly shopping for a home near world-renowned trout streams from their home in Washington, D.C., for the past eight years.

Steve found what he was looking for in a canyon-like setting flanked by cliffs and lush timbered hillsides along Colorado’s Taylor River. A tributary of the Gunnison River, the Taylor is 48 miles long and is located at an elevation above 8,000 feet, near the Continental Divide. It’s a trout fisherman’s paradise.

“We had never even been to Colorado before,” recalls Laurie. “And we certainly had never lived at an 8,000-foot-high elevation. I thought, ‘This is going to be interesting…’”

While the siting of the home on the river was impressive, first impressions of the interior were underwhelming.

The front door’s location seemed like an afterthought, hidden from view. The basement was dungeon-like, dark and claustrophobic. The stairs to the basement were not up to code. The home was outfitted with orange, padded-upholstered wall coverings that emitted an unfortunate smell. The kitchen was tiny and tucked into a corner. None of the bedrooms had closets. The fireplaces needed work.

“The drive up to it was so beautiful. But the real estate agent warned us that a lot of prospects would enter the home and then turn around and walk right back out,” Laurie admits. “At first we were kind of overwhelmed, and the basement really freaked me out. But we thought the bones of the home held promise.”

It was time to bring the home into the modern era to ensure that its original splendor could continue, but Laurie and Steve knew they couldn’t take on the renovation alone.

Architect Jennifer Hartman with Sunlit Architecture in Crested Butte, Colorado, was enlisted to create a new vision for the home. Custom builder Jason Kidd of Hargrove & Kidd Construction, also in Crested Butte, was next on the job to realize the home’s transformation.

Once Jennifer and Jason inspected the structure, they found other repairs that were needed. Topping the list were a new roof, new windows and skylights that needed to be replaced or eliminated due to water damage. “The contractors and tradesmen called the aged skylights ‘leak holes,’” Jennifer recalls with a laugh.

Kori Keyser, owner of Keyser Interiors in Frederick, Maryland, served as the project’s interior-design lead. “I’ve known Kori for more than 30 years,” Laurie says. “We met when she first graduated from design school, and she has helped us transform four homes. She is seriously talented, as well as a great friend, so when Kori first toured the home and said, ‘I think it’s freaking awesome! It’s got great bones!’ I immediately went from being doubtful to being excited about renovating it.”

With the full team in place, they recognized the potential and craftsmanship in the original home, but it was ready for its large-scale renovation.

When drafting the new design, Jennifer’s goal was to use the front entry as an anchor, so there is no ambiguity for visitors. Timber-framed trusses now define that space. The exterior was sandblasted, removing the gold-toned stain and changing it to a rich brown. Interior trusses were stained a dark cocoa to contrast with the white-washed walls, specified by Kori.

The logs absorb light, so Jennifer’s other goal was to infuse more daylight into the interior. She recruited a structural engineer versed in log and timber frame construction to evaluate which sections were load-bearing and which were not. This allowed the construction team to remove the ceiling in the kitchen and add volume, as well as open it to the dark trusses overhead.

Jennifer’s plans incorporated a new facade, including adding five dormers where the skylights were previously, dramatically changing the roofline. The design also integrated a custom stairwell with steel stringers and open risers, which, thanks to its configuration, lets in a lot of daylight.

In the basement, Jason Kidd’s team installed large window wells on the east, south and west sides to both meet today’s building codes for egress and bring generous amounts of light into the subterranean space. The basement now offers a home gym, two bedrooms and a full bath.

“I wish I had Jennifer and Jason’s subs to work with in Maryland,” Kori recalls. “They are incredibly talented craftsmen. Jennifer was amazing when designing the stairs, and she completely transformed the exterior of the home.”

Previously, the home’s color palette was sky blue for the ceilings and an orangish shade for the walls. Both had to go but were replaced with a surprising choice. “I know that specifying the whitewashing the walls and ceiling was a leap of faith for Laurie — and it’s very unusual in Colorado — but it really made the trusses pop,” Kori explains.

The home’s redesigned kitchen earned kudos for Kori’s firm, recently placing third in a regional kitchen design contest sponsored by Sub-Zero. “I was going for a modern, industrial feel for the kitchen,” Kori says.

Steve and Laurie’s favorite features tend to vary depending on the season. In the winter, it’s the little study just off the main entrance. They cuddle up in that room with the gas fireplace, either to read or watch their favorite shows. In summer, the back patio is the place to be to soak in Mother Nature. “We have flocks of hummingbirds zipping around. The community has horses, and we love watching them. It’s a very peaceful place. If you can’t get centered here, you need to change your lifestyle,” Laurie says with a smile.

Laurie, whose hobby is painting in watercolors and oil, put all this Zen-like tranquility to work. She recently held a week-long artist retreat at their home, bringing in accomplished painter Richie Carter to assist other artists with their technique.

Steve and Laurie’s two sons and their girlfriends often visit, as do many other friends and family. “Regardless of who’s here, the reaction they all share is, ‘We don’t want to leave!’” That’s when you know you’ve done something right.

See Also: This Log Home Renovation Is a Mix of Old and New