At his weekend ranch, a Texas physician brings new life to a decades-old log home, opening it up with a spacious addition. The grand double door with carved detail takes center stage at the home’s entrance, while a Texas Longhorn wall mount and a pair of free-form wood benches play a supporting role in the rustic scene. The hardy materials used throughout the home lend a casual tone to the weekend ranch. “We’re pretty informal out here,” he says. “We’ve got three rescue dogs, who come in and out after chasing cows and buffalo all day, but with the stained concrete floors, we don’t worry about the mud.”

A rock chimney stretches up through the center of the new addition, anchoring the space. Each corner of the room serves a different function — including kitchen, dining table, breakfast nook and living area with television. The chef’s kitchen boasts plenty of room to cook and converse. Features include locally made cabinets, leathered-granite countertops and upgraded appliances, including three ovens. An elk mount and bobcat reinforce the lodge-like feel. 
By weekday, Brooks Trotter is a physician who spends his time addressing the health concerns of patients in the Dallas-Fort Worth area. But when the weekend comes, Dr. Trotter trades his stethoscope and lab coat for a pair of jeans and boots and heads an hour west to his 165-acre ranch. There, the only thing on his mind are his herds of Longhorn cattle and buffalo and enjoying the wide-open spaces.
But he isn’t the only one soaking up the fresh air while hand-feeding the livestock or riding four wheelers over the rolling green hills. There are always plenty of friends and family to join in the fun. So many, in fact, that a couple of years back, Brooks knew it was time to expand the 20-plus year old log home that he had purchased with the property. “We just didn’t have enough bedrooms to put everyone up,” he explains.
He reached out to the home’s original manufacturer, Real Log Homes, for help, and it wasn’t long before Brooks and Real Log Homes’ regional sales manager, John Harper, were at the property making plans for an addition. A former builder, John had a design drawn up within the hour. “We were sitting outside, and the wind was going about 25 miles an hour,” he chuckles. “I had to hold the paper from flying off while I was drawing.” From that whirlwind beginning, the new house quickly settled into shape. 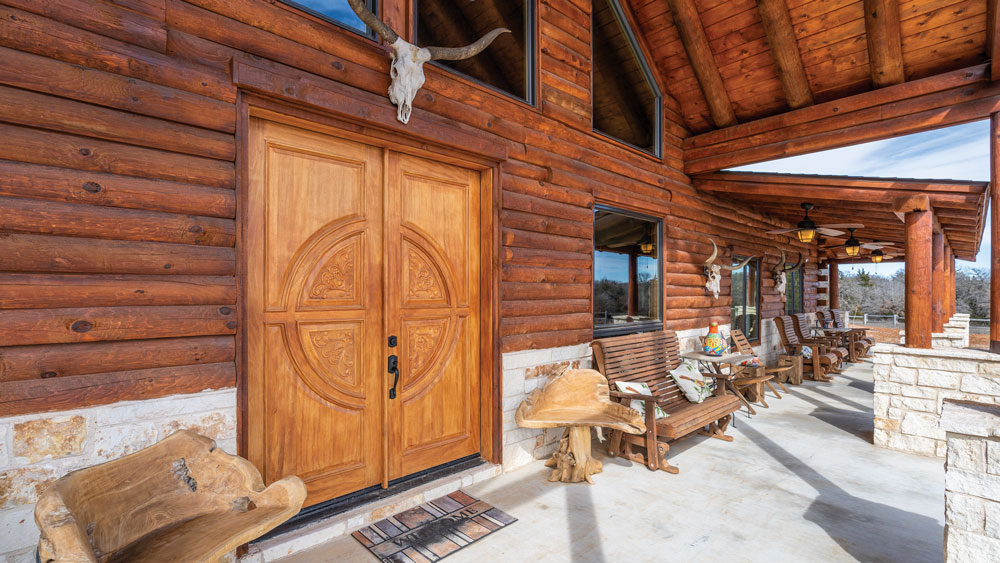 The addition would feature a grand, lodge-like space large enough to house the kitchen, living and dining areas, plus two master bedrooms and bathrooms, porches galore and a four-car garage with attached workshop. More than doubling the home’s size, the addition would bring an extra 2,800-square feet of living space to the modest 1,800- square-foot, three-bedroom, two-bathroom cabin.

As with any addition, the project wasn’t without its hurdles. “You always have a challenge when you marry the old with the new,” explains John. “The goal was to create a seamless transition, so you couldn’t tell where the original home ended and the addition began.” Together, John and Brooks determined that the ideal transition point was the far right-side of the cabin. “It already included a window, so we opened up that wall and traded the window for a French door,” John says. At the connecting point between the two structures, John added a wet bar into the design — the perfect place to toast the marriage of old and new and an especially appropriate touch considering the special event that took place just days after the house was move-in ready.
Brooks explains: “About the time, I started talking to John about the plans, my daughter asked if she could get married at the ranch.” With less than six months to complete the addition, plus two months of delays due to weather conditions that prevented the foundation from being laid and hiccups in the material delivery, the process moved at a fast and furious pace. “One day, I had eight different crews out there at once — the painters, plumbing, electric, HVAC, stonework and countertop guys were all bumping into each other — but we got it done in time!” exclaims Brooks. 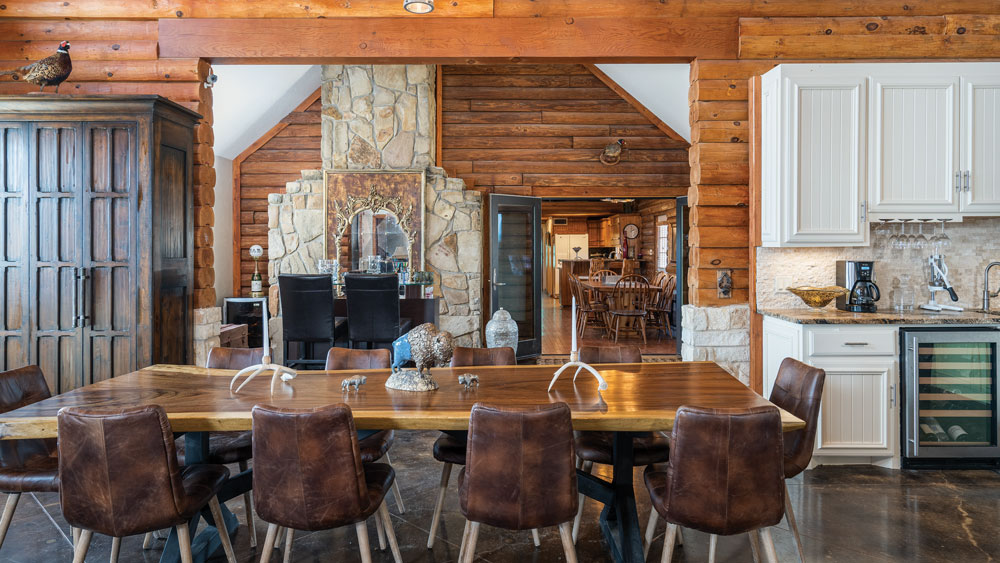 With the new structure complete, it’s impossible to tell where the old ends and the new begins, a fact owing to the careful match of the logs and thoughtful architectural details. “The original cabin used an interesting log profile, with mismatched widths anywhere from 8 to 10 inches, stacked 6 inches high,” says John. “It looks like Daniel Boone cut them straight out of the forest.” With the same log profile in place, the only thing left to do was match the stain. The original cabin’s eastern white pine logs were stripped down to bare wood, and the whole house was coated with a stain dark enough to blur the differences between the old and new logs. Stone detail added around the foundation and columns complete the union.

While Brooks and his crew have more space to spread out with the new addition in place, it’s not unusual to find everyone gathered on the front porch in the morning with cups of coffee in hand, watching the cattle gather around the lake, or enjoying an impromptu 80’s-themed dance party on the rear-porch-turned-dance-floor once the sun goes down. “It’s good weekend therapy,” Brooks says. It’s just what the doctor ordered.
See also: Log Home Additions: What to Know
★