One man fulfills his childhood vow to build a bungalow-style log home on 44 acres of North Carolina farmland.

When most boys are busy playing with toy cars or climbing trees, Cory Snow was plotting to buy land. “When I was a kid, I told the old farmer next door that, one day, I would buy his property,” he recalls. “I kept that promise, and when I turned 20, I bought 20 acres from him.” 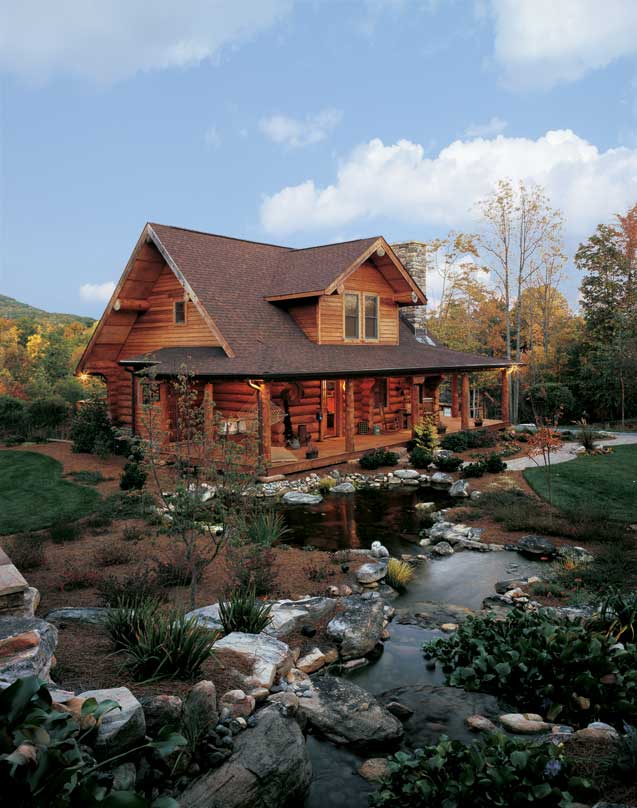 The water garden Cory Snow designed meanders through the front yard, creating a unique setting for the Craftsman-style log bungalow.

Years later, Cory and his wife, Emily, added 24 acres from an adjoining farm and started to discuss the kind of home they wanted to build. For Cory, there was no question — he wanted a log home. “It’s always been my dream,” he shares. “I love the rustic, natural feel, and I like homes that aren’t conventional.” Though log homes aren’t uncommon in the Southeast, most are constructed with rectangular or small round logs. Cory, on the other hand, wanted huge, round logs — as he says, “Logs that make a statement.” 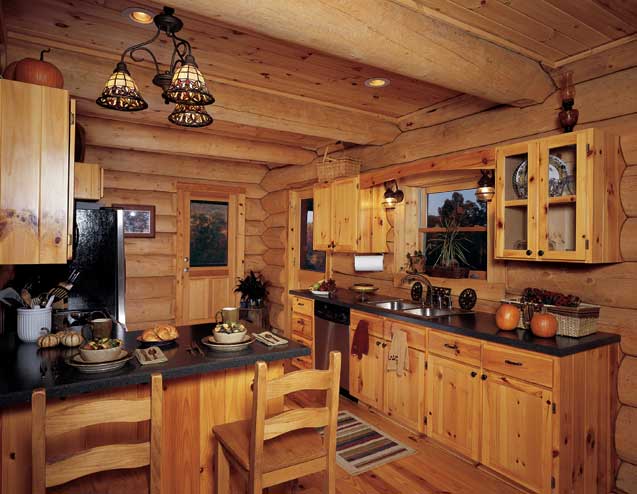 The kitchen served as both cooking and dining space, since the Snows chose not to create a separate dining area at first. (They’ve since created a dining room with a recent addition.) The kitchen cabinets are knotty pine crafted by a local cabinetmaker, while the countertops are faux granite. The kitchen doors leads to a deck that stretches across the back of the house.

So he sketched a rough floor plan and presented it to Ted Ciolli, owner of Missouri-based BigLog Homes. From Cory’s plans, Ted and his team designed a handcrafted, 1920s American Craftsman-style bungalow with two bedrooms and three baths, spanning three levels. The plan called for full-round spruce timbers averaging a whopping 15 inches in diameter with saddle-notched corners, beveled edges and no butt joints. On the exterior’s gables, 5-foot-deep overhangs protect the wood from inclement weather and sun exposure. 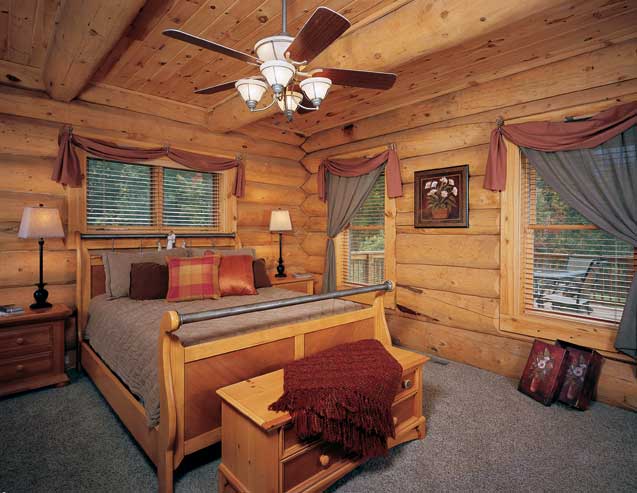 Cory and Emily’s master bedroom features an Eddie Bauer bedroom suite, including a sleigh-style bed with pewter railing and matching trunk. The window behind the bed looks out to the garden waterfall. When it came time to build, Cory didn’t want to be a mere bystander. He worked alongside the BigLog crew to erect the shell and then acted as both general contractor and builder to finish the home. His creative handiwork includes combining tongue-and-groove pine paneling with T-111, a rough-faced plywood with vertical grooves, along some of the walls and ceilings. “I wasn’t sure what to expect when I heard he was going to use T-111 like that,” Ted admits. “But when I saw it, I was impressed. It’s a smart choice since it can be better at stopping air transference than tongue-and-groove paneling.” Cory’s fondness for the unique also extends to his landscaping. He designed the front-yard water garden to contain an 8,000-gallon pond and a waterfall that circulates with enough force to be heard throughout the home, when the windows are open. The front porch offers a front row seat to the water. The striking scene has been the backdrop for photographs of many wedding parties and prom goers. When the Snows built their home in 2003, they planned to add on to the original 1,500 square feet, which had no dining room and a basement garage. In 2007, they did just that. BigLog built an 1,100-square-foot addition that includes a new living room that is accessed from the kitchen. The original living room is now a separate dining area. They also added a two-story log garage with a room above that connects to the old basement via a laundry-room breezeway. The previous basement is now a game room. Ted notes that, with careful planning, modifying a log home needn’t be a big challenge. “You have to respect the structure, but it can be easy to add to log to create the exact home you’ve always wanted.”