In the Trillium development of Cashiers, North Carolina, a one-of-a-kind home blends the exotic with the practical to capture the unique vision of the homeowners. 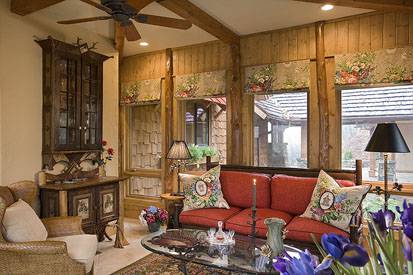 The exterior of the home

There’s something about North Carolina that brings out the best in custom wood structures. One home in particular, located in the Cashiers area, has proven that a well-coordinated project between owner, architect, builder, and interior designer can perfectly capture the owner’s vision. “It’s an iconic home,” says Erwin Loveland of the international design firm MossCreek. “The paradigm shifted when this home was constructed, so much so that the developer included a rendering of one of our designs in their Wall Street Journal advertisement as a signature for the development.”

Ralph and Ethel Liniado didn’t start out to set the Cashiers, North Carolina, area on its ear. They had a smaller timber frame home in the area when they decided that it was time to design and build their future retirement home beside the 17th green of the country club, and bought an estate lot. “At first we thought we wanted a log home,” Ralph notes, “but as time went by and we researched through many magazines, we felt that we might end up with a home that was darker and heavier than what we were looking for.”

The great room looking toward the large windows and dining areas at the Liniado residence.

Since they already enjoyed a timber frame home, they didn’t have to be sold on the beauty of that style, but as they examined a bit further Ralph and Ethel realized that they especially liked the unique, rustic designs created by MossCreek. And, on a snowy January day, they met designer Allen Halcomb and Loveland at the property to see if it was possible. Quickly, it became clear that their original idea would not work as well as they would have hoped. “They had in mind a walk-out plan because it was a rolling hillside,” Halcomb says. “But this was a home that had three sides exposed to public view. This home had to be, in Ralph’s word, ‘beautiful’ almost all the way around the home because of its exposure.” 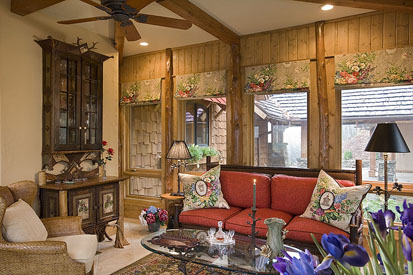 The colorful sunroom in the Liniado residence

The challenge was in how to design the working areas of the home, such as the bathrooms and laundry, away from walls that demanded large windows and plenty of exposure.

Crowding them all into the single side on the hill wasn’t the answer, particularly to maintain flow through the home. So they didn’t. Judicious use of porches, overhangs and interesting, gabled roof lines allowed the Liniados and their architectural firm to create a lovely image that hid so well the fact that this was much more than a feast for the eyes. Amazingly, they created the basics for a one-of-a-kind home within 48 hours, and Ralph estimates that the design was 90 percent complete that quickly. “We tweaked it later, but essentially, we had our home,” he says. 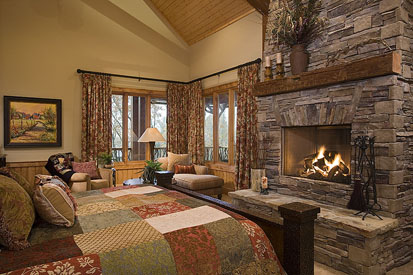 The unique master bedroom with its own stone hearth

Even more amazing was that the 10,500-square-foot home incorporated many unique or seldom-found elements. “There’s a sameness to rustic-influenced, mountain retreats that we wanted to avoid,” continues Ethel. “We wanted uniqueness.”

Furthermore, the couple wanted to use local artisans where possible to capture the character and feel of the area, but they weren’t afraid to cross the state line either. For example, the great room chandelier was designed locally and then built in Los Angeles. And Ethel’s right hand in creating the spectacular interior was Atlanta/Cashiers designer Darren Whatley, whose work has also been featured on HGTV. Because their primary residence is a short two-and-a-half-hour drive away, Ralph and Ethel were frequently on-site for consultation during the two-year build process. 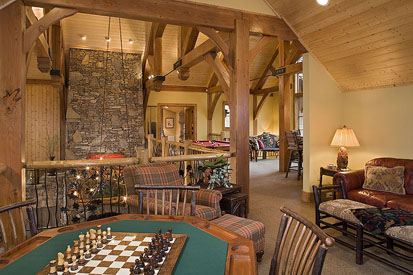 No decision was too large or too small, either, as their enthusiasm for the project continued to grow as it progressed. “We were concerned that elements such as the kitchen wouldn’t be ours, so we were involved with every decision,” notes Ralph. “We listened to Allen and the staff at MossCreek, our contractor and the designers, because we respected their opinions. They gave us great advice, too, but ultimately, everyone understood that this home was a hallmark in our lives.”

For more on this home, see the Fall 2007 issue of Custom Wood Homes.
★