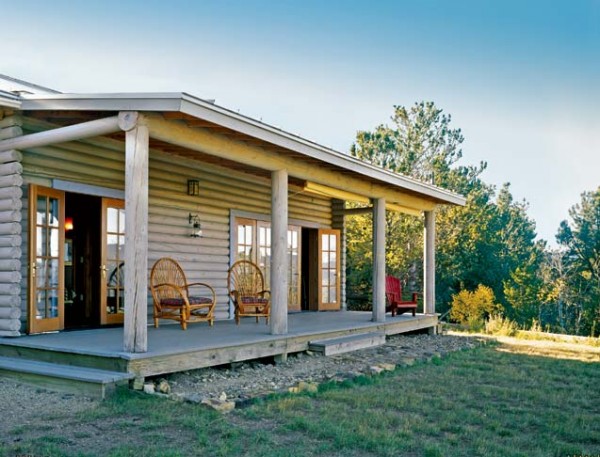 The cabin is low to the ground and snuggled in among the pines and aspen, a humble lookout post facing the Continental Divide on the horizon. Maybe because a ghost town is just one mile away, James decided to go with a Cabot’s bleaching stain on the exterior “to weather it down to a gray so it would look natural.” Natural like a sun-bleached rack of ribs. The blue standing seam metal roof nearly disappears into the sky. The periwinkle blue window trim provides a bit of levity to the humble home.

Welcome to mining country after the gold rush—but there are still some riches to be found here. At an elevation of 9,400 feet and with Denver a mere 40 miles to the east, James Martin and Deborah Williams call it their slice of the universe, which, in this case, consists of about 7 acres of pay dirt woven together from old prospectors’ claims. 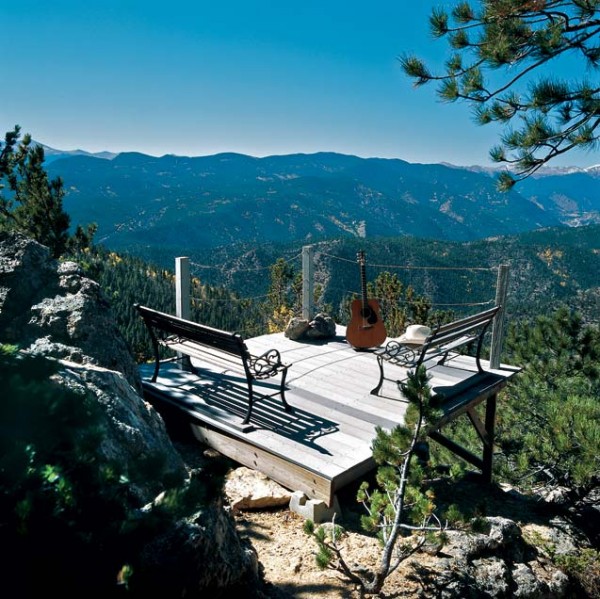 James calls this deck the “listening point.” You’d get there by walking about 300 to 400 yards through the woods to a south-facing bluff on a rock formation. “I built this deck to sit down and be quiet and listen to the wind and birds,” he says. Because he doesn’t appreciate obstructed views but wanted to contain any accidents, he strung metal cables between the corner posts. The deck is 100 square feet, constructed of the same composite decking as the main porch.

The small log cabin parked at the end of a steep gravel road not far from Isle Royal Lode gold mine looks as much a part of the landscape on this windswept bluff as the Aspens that engulf it.

The cabin is 900-square-feet capped with a metal shed roof and staring due west as the sun sets over the Continental Divide.

“I wanted something small,” James says, “very Zen-like with useful space; something minimalist.” It reminds James of a miner’s shack he lived in decades ago down in Breckenridge. “I’m a country guy at heart, I guess,” he confesses.

The foundation was built on the tailings of a 100-year-old gold mine. The layout is basic: Enter into the great room (a living room plus dining area), pass-through to the kitchen; one small bathroom on the left, two bedrooms to the back and a roomy loft above those.

By vaulting the ceiling over the main living quarters and using a range of earthy colors to distinguish the rooms, the couple created both depth and space in the modest home. Even the furnishings, cabinetry and keepsakes have that timeless, world-worn charm. James and Deborah are both in the design business—he focuses on color design services and she’s an interior designer—and frequent travel is a requirement for both of their jobs, so the cabin is their chance to reconnect in tranquility.

To that end, James hired an Oregon outfit to custom-make red cedar divided-light windows and doors. A set of French doors in the living room and one in the master bedroom open out to a wide covered deck, aiming west.

“We can lie in bed and look out and watch the sunset.”

True to the old cabin flair, the flooring is 5-inch-wide tongue-and-groove pine and the ceiling is covered in tongue and groove pine car siding. The narrow 6-inch-diameter of the Douglas fir logs instill a humble element, as larger logs would outsize the home’s simple intent, James says.

Adds James: “Everything fit beautifully and they were probably 30 percent cheaper than anything else I found.” 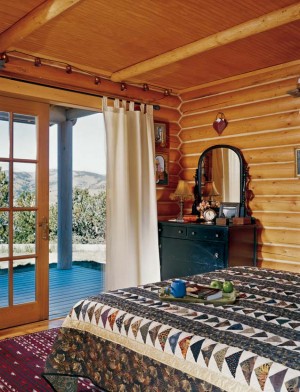 Two old bent cane chairs face the pertiest view out of the Isle Royal Lode gold mine. “I wanted a sunset view and that’s what this cabin is all about,” James says. “We have a 170-degree view looking due west at the Continental Divide.” The windows and French doors were custom made by Bergerson Cedar Wood Windows and Doors. The decking is a composite lumber that would stand up to harsh and extreme environmental conditions.

Born into a logging family, Merlin is an engineer by training. He combined those skills in 1989 when he founded the company by designing and building his own milling equipment.

“Our claim to fame,” Merlin says in a folksy rumble, “is that we do a tight-fitting, precision-fit log, and we don’t charge for the extras.”

“Just no messin’ around,” says James. Which is the way he likes it—simple, true and natural, like that little cabin built on what others left behind after the gold rush.