A homeowner brings the northern way of life to New Mexico via a small, handcrafted log home.

Jim Koschmann always knew he’d end up owning a log home. As a Wisconsin native, Jim fondly remembers family vacations to the northern part of the state — hunkering down in log cabins situated among clear lakes and thick forests.

More than 40 years later, Jim has translated those vivid memories into a Southwestern setting, building a log home in Cloudcroft, New Mexico. 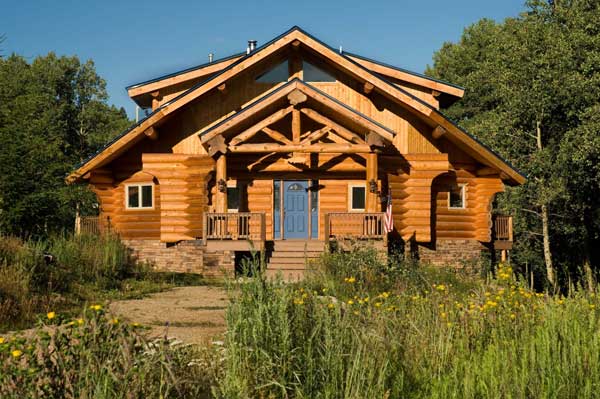 With its innovative hexagonal design, Jim and Christine Koschmann's home proves that small (it's only 1,500 square feet) doesn't have to be boring.
"Ever since I was a kid, I wanted a log home," Jim says. "They just had a warmth and charm that I always remembered."

As a busy veterinarian working in El Paso, Texas, Jim spent 10 years dreaming about building a vacation house for himself, his wife, Christine, and their grown children and four dachshunds. He regularly sifted through log home magazine and real-estate advertisements. 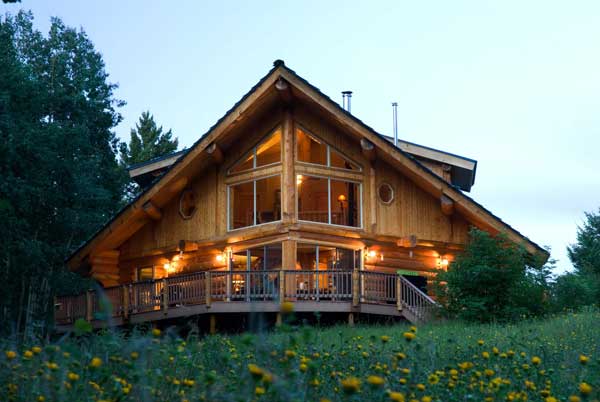 The couple jazzed up their New Mexico getaway with all-natural logs, vivid painted walls and strategically placed stone, creating a space that seems much larger than its diminutive footprint.

All the while, he collected artifacts from his annual trips to Alaska — tribal masks, mounted fish and art objects — which he hoped to one day display in the house. Finally, the Koschmanns found a tract of land in southern New Mexico, about a two-hour drive from their west Texas home. The setting — a wild mix of open space and forest — fit Jim’s memories of his upper Midwest upbringing and his regular jaunts to Alaska.

"Once we found the land," Jim says, "it was just a matter of looking at the type of floor plan that would maximize the view of the wildflower meadow and the surrounding aspen trees." 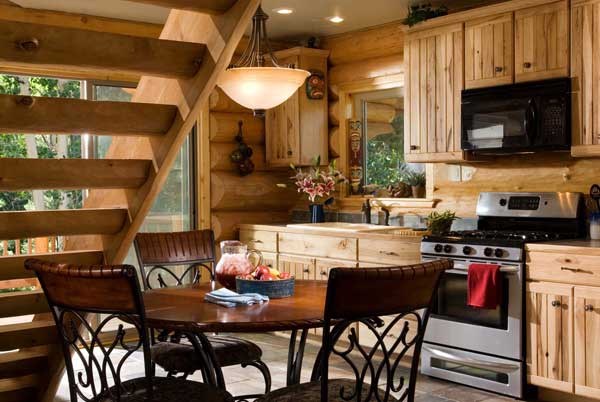 Hickory cabinets line the warm and welcoming kitchen. Although the couple dines here often, their favorite place to eat is outside by the grill.

Jim ultimately chose the Spring Mountain design offered by Boise, Idaho-based Summit Handcrafted Log Homes. Jim liked the modest size of the house (just under 1,200 square feet) because it would minimize maintenance, while the prow-front design and high windows offered ample views of the outdoors and maximized the heating effect of the sun. 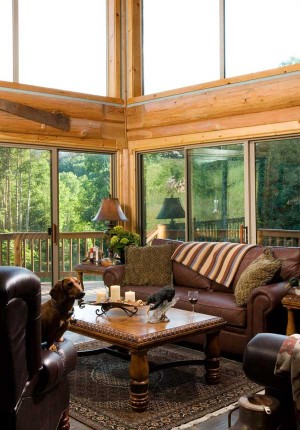 Large chairs and sofas create a cozy atmosphere in the great room, while the vaulted ceiling and large windows bring a sense of openness into the small home.

"It’s a very open design," he says. "I didn’t want a chopped-up floor plan. This home has a open main living area that allows you to look from the main level up to a high pitched ceiling."

Working with Mark and Alvin Vaught of Country Living Log Homes, Summit’s dealer in Temple, Texas, the Koschmanns served as their own general contractors and oversaw the construction, which began in January 2003 and was completed in December 2006.

The house is constructed with round Douglas fir logs with a latewood finish and an Eastern white pine ceiling. In keeping with their handcrafted nature, the 12- to 16-inch-diameter logs are varied and have imperfections, giving the house a rustic look that Jim and Christine love.

"The Koschmanns were the kind of clients you dream about because they did their homework," says Robert Lockerby, co-owner of Summit Handcrafted Log Homes. "And they were just super nice people."

Even though the entire family spends time there, Jim admits to sneaking off to the house by himself whenever he can.

"On my day off, I’ll go up real early and spend the day reading a book or painting a duck decoy," he says. "It’s my safe haven."