A sod roof tops the home’s detached two-car garage. More commonly found in Europe than North America, living roofs are good insulators and are healthy for the environment. The Scandinavian- designed playhouse may look like it was plucked from a fairy tale, but it’s equipped with practical offerings, like electricity and insulation

A cascading waterfall and pond grace the back of the house, which is made almost entirely of glass.

In the kitchen, an abundance of light pouring through a host of windows, plus a skylight, brighten up the space filled with blond pine walls, slate floors, maple cabinetry and polished-granite countertops. Homeowner Carole Rousseau worked with an interior designer to choose the subdued gray hues for the furniture in the living room. The color palette draws from the fireplace’s stone. The dining area features large windows overlooking the garden and the lake. Anchoring the wall just beyond the solid-cherry table, a painting of polar bears by Marta Milossis, a French-born artist, echoes the tones found in the heated slate floor.

The twisting pinewood staircase was designed with nooks and niches, creating vignettes and focal points along the climb. The master bedroom’s king-size bed sits on a solid maple platform, complementing the dark-toned patches of the cowhide rug beneath it.

The couple has contemplated remodeling the master bathroom, but for now they’re content with its ample space and abundance of mirrors, plus his-and-hers sinks and a luxurious whirlpool tub. A climate-controlled, glass-encased wine cabinet keeps prized bottles on display and at the ready.

Who could resist this azure water? The tranquil tree-lined lake is perfect for hiking and kayaking — two of the owners’ favorite pastimes.

Written by Anne Gordon, Perry Mastrovito
Photography by Perry Mastrovito
When Mario Lavoie and Carole Rousseau began looking for a country home, they knew it had to be made of wood. But when they arrived at a property overlooking a quiet lake near Saint-Adolphe-d’Howard in the Laurentian mountains, it wasn’t the house that instantly won them over. Instead, when they saw the breathtaking views, “It was love at first sight,” says Carole. The fact that the land came with a gorgeous log home and a beautifully landscaped, terraced garden sealed the deal.


Built more than a decade ago by Quebec-based Patriote Home (a company specializing in log and timber homes and chalets), the house was originally created for a Norwegian family. As such, it integrates several features reminiscent of the original owners’ heritage, including the glass panes on either side of the front door etched with traditional Scandinavian motifs. Though Mario and Carole were pleased with the bones of the house, made of eastern white pine logs and featuring timber frame elements in the gabled roof, they were determined to put their own mark on the three bedroom, two-and-a-half bathroom home.
Carole enlisted the help of an interior designer to help infuse the house with a new signature style. Not wanting anything too showy, they filled the home with subdued hues and furnishings that would support — not distract from — the natural serenity of the property. This is especially true of the master suite on the upper floor, accessible through a twisting pinewood staircase that includes a niche for displaying an interesting chandelier made of branches. The bedroom exudes natural comfort, thanks to its maple wood furnishings, cowhide rug and whimsical details, like the birdcage-style bedside lamps that project delicate patterns on the wall when lit. 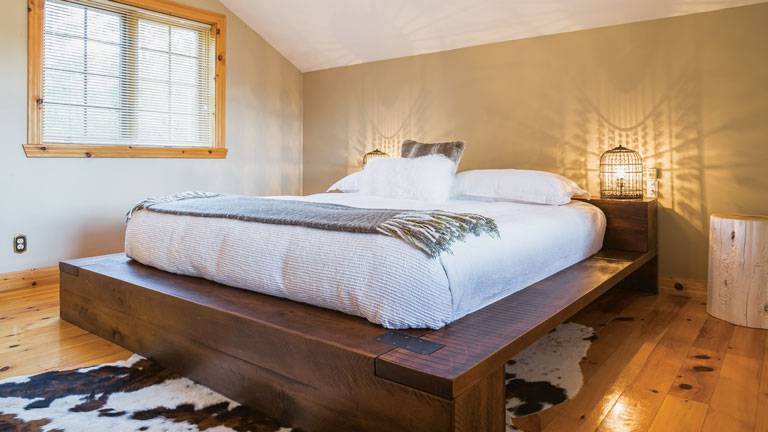 Though nearly 20 years old, the house remained in mint condition, with the exception of the flooring in the kitchen. “We had a severe frost, and the floorboards became warped,” explains Carole. The couple used the setback as an opportunity to update the kitchen to their tastes. They swapped in a mix of maple and slate flooring with radiant in-floor heat. They also opted to paint over the original ceramic tiles on the backsplash. Cabinetry, an island topped with polished, dark-toned granite and a range hood — all made of maple — round out the modifications to the space.
While the views inside are nothing short of stunning, the ones beyond the glass really steal the show. The back of the house, almost entirely made of glass, offers views to the outdoors no matter where you are in the home. To continue the emphasis on nature and encourage outdoor living, a terrace runs the width of the house, with a large central area for dining and admiring the sunsets over the lake. The balustrade used to be made of wood, but Mario and Carole replaced it with glass panels to ensure seamless views of the lake and garden below.
The terraced garden, which extends down to the lake, is composed of flowerbeds, shrubs, low evergreens and a small waterfall and stream cascading over rocks into a pond. To guarantee the peace and privacy they craved, the couple also purchased the lot to the right of the house, which is lush with mature deciduous and evergreen trees. (Plans to add walking trails to the property are in the near future.)

Tucked in one corner of the garden, a playhouse that looks as though it was plucked from a fairy tale is the spot the couple’s two young grandchildren gravitate towards most during their visits. The Scandinavian-style structure was built from a kit that the previous owners had shipped over from Norway. The 15-by-15-foot, well-insulated building includes electricity, elaborately carved details and, topping it all off, a grass roof that keeps the interior warm in winter and cool in summer. When the grass gets too long, the owner climbs onto the roof and trims it with a weed-eater. The same type of eco-friendly roof covers the detached garage, as well.
Thankfully, as a weekend retreat, maintenance requirements are at a minimum for the couple — a fact that allows them to make the most of their beautiful Laurentian location. Boat rides, kayaking on the lake and long walks along the property are some of their preferred pastimes, but of all of their usual activities, relaxing on the terrace — taking in the breathtaking views that initially drew them to the property — may just be the best way to spend the day.