An emergency room doctor finds the right prescription for peace and solace in a childhood vision of rustic log home living. 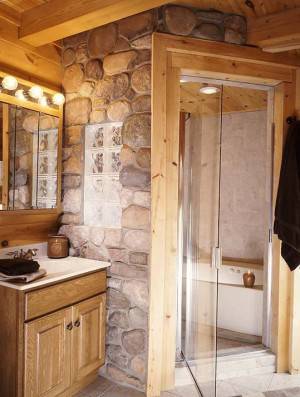 Kevin Madtes still remembers the first time he saw a log home. He was 6 years old, and he and his father were rumbling through the wintry white Adirondacks on their snowmobile. It seemed like those grown-up tree houses were everywhere he looked—the homes, the resorts, the restaurants. One day, he decided, he would live in a house built of logs. Nearly three decades later, he has his own 4,000-square-foot log home just minutes outside Allentown, Pennsylvania. Not just a realization of a childhood dream, his 5-acre property is also a peaceful antidote to his adrenaline-charged life as an emergency-room doctor. "I think it's cozy," Kevin says. "I love the outdoors, and it makes you feel like you're outdoors when you're in your home."

One of the biggest challenges was finding a place to build. Developments were out because log homes weren't allowed, and he wanted at least 3 acres and an easy commute to the hospital. "It took me longer to find the land than it took to build the home," Kevin says. When he was ready to build, he turned to Kuhns Bros. Log Homes and general contractor Jack Wolfe of Log Home Erectors. Jack remembers Kevin came with a crayon drawing of his vision. "That house isn't going to work," Jack told him. For one, the roofline didn't match Kevin's plan for the interior, and "there were a lot of things that weren't feasible," Jack says. But with some tweaks from the Kuhn Bros. design team, they found a solution that both pleased Kevin and was structurally sound. As a 30-something bachelor, Kevin's wish list was different from the average family with kids. He opted for a smaller kitchen and bedrooms while playing up the home's many gathering spaces. He wanted multiple levels, so you could step down into the great room and up into the master bedroom. "We spent a lot of time planning," Jack says. "We always say, 'Anything you can dream, we can build.' But he challenged me on that!" Kevin was impressed by Jack's expertise and patience. "I took these simple drawings to him, and he made this real thing," he says. One of the home's distinctive touches is a "front porch" outside each bedroom, complete with a railing, interior window, porch light and plaque with the room number. "I kind of wanted to make it feel like a hotel," Kevin explains. And sometimes it truly does feel that way. Friends and family often stop by and show off the home even when Kevin isn't there. His great room, game room, upstairs loft and downstairs basement bar are ideal for entertaining. After he moved in a year ago, he finished the basement, adding a gym, theatre room, bedroom and bathroom. "It's everything that a bachelor would want," Jack says. "It's a unique design and uniquely decorated. It's not a cookie-cutter house."

Some of the unusual decor includes a children's swing, a canoe that appears to go through the wall, and various nautical accents in homage to Kevin's love of boating. But what Kevin loves most is the home's openness. "No matter where you are in the house, you can see everything else," he says. One of his favorite spaces is one of the simplest: A sunken, window-lit room with a river-stone fireplace. The floor was covered with a gorgeous bearskin rug, a gift from a patient, until the friskiness of his golden retriever necessitated hanging it above the fireplace.

Finding the furniture was another challenge. He wanted pieces to match the sturdy feel of the logs. He found many items at Log Cabin Rustic Furniture and Railing in Rocky Mount, Virginia, including a 12-foot dining table, coffee tables, armoires, desks and a bedroom set. "Everything is log, and it just matches the house perfectly," he says. And nearly 30 years after Kevin was first hooked by the romance of logs, his vision for his own home is finally complete.
★