Something old becomes something new when a Pennsylvania couple builds a Swiss-colonial-style log home to replace a community heirloom. 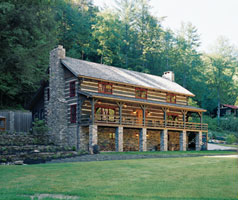 Rendering of the exterior

For most, building a log home is a personal decision, made to please yourself, friends and family. But for Scott and Deneen Knisely, building their handcrafted log home in Lock Haven, Pennsylvania, helped to preserve their community’s history. In 2002, the Kniselys lived near a 20-acre property that included a log house dating back more than 70 years. The building, known locally as the Rocky Point Lodge, was serving as a restaurant at the time, but had taken on many roles over the years—first, and most notably, as a Boy Scout camp.
When Scott heard a rumor that the property might be going on the market, he had a word with the owner, expressing his interest in buying it. Six weeks later, the acreage was his. The kitchen in the period-appropriate log home
“We loved the property and the building,” says Deneen, “but it was too damaged to be saved.”
So they got to work researching companies to build the new home that would replace the old one. Since so many local people have fond childhood memories of time spent at the lodge, the Kniselys decided that the new structure should resemble the old one as closely as possible, so they looked for a design that would use the same footprint as the original.
After a quick trip to Virginia to look at an existing house, they chose a modified version of the “Robinson,” a 3,750-square-foot plan by Hearthstone Inc. Scott and Deneen knew going into the design process that the home’s decor was going to have a 19th-century-American feel, so they wanted the home’s architectural details to support that theme. “When the house was being built, I researched things such as period molding depth, wainscoting height and the look of the floors,” says Deneen. Hearthstone even had the logs sandblasted to give them a weathered look. “We just love the rustic, warm feeling of a log home,” Deneen adds. “No other home compares.”
The Builder's Story
When Scott and Deneen Knisely first bought their property, the plan was to try to save the original log structure. The first step: Calling Jeff Maguire of Big Woods Construction in McElhattan, Pennsylvania, to inspect the building and offer up his opinion regarding the state of the logs. “It was an old home,” says Jeff. “I went around and tapped the logs with a 6-inch ice pick to test their strength. Turns out, you could stick it clear through the wood.” A complete tear-down was in order. Luckily, Ernie Kaufman, a sales representative for Hearthstone Inc., was also on that walk-through. After learning the home couldn’t be saved, he proposed replacing it with a Hearthstone plan, and the “Robinson” was a near-perfect fit, needing only a few modifications.
The home is made from large-diameter eastern white pine in a profile from the Bob Timberlake series. “The log is sawn on two sides, then hand-hewn to a 6-inch thickness with varying heights,” says Ernie. “The logs also were weather-aged, meaning we used a sandblaster to remove the soft part of the grain, which gave them a grooved, weathered texture. They look like old barn beams.” The logs were then stained with Perma-Chink’s “Driftwood” stain. To top off the home’s vintage look, Pat Woody of Lynchburg, Virginia, got to work on the chinking. Pat specializes in period reproductions and historical homes. The variations in the chinking are the perfect finishing touch to bring home the 19th-century flavor the Kniselys desired.
★