Room and a View: A North Carolina Log Home

A North Carolina log home captures the grandeur of its highlands setting.

Standing on the deck of their North Carolina log home, overlooking woodlands and the layered vistas of the Blue Ridge and Smoky mountains, Dillie and Jimmy Wammock are a long way from their home in Gulf Shores, Alabama. They found their way to the highlands community of Cashiers at the invitation of Jimmy’s longtime friend and business partner, Henry Davis. "When Dillie and I came from Alabama to visit, we left home on a hot, steamy morning, with the temperature at 101 degrees," Jimmy recalls. "We arrived at Cashiers at three o’clock in the afternoon to a temperature of 74. It didn’t take long for me to ask, ’How do I get a little piece of this heaven for myself?’" By doing the landscaping themselves, the Wammocks kept the lot natural and took advantage of stone outcroppings to shape garden beds. They even made a split-rail fence.

As fortune would have it, the lot directly across from Davis’s was for sale. Lured by an unbeatable view of old-growth forest on Big Sheepcliff Mountain and the indigo mountain skyline on the horizon beyond, the Wammocks bought the property. They agreed the land called for a home that mirrored the setting: a log cabin amid the trees. They designed it to take full advantage of the views, positioning each room and two decks to capture a great vista. Their only concern was the steepness of the lot. "We’re from the flatlands of the Alabama coast," Jimmy points out, "and the prospect of attempting to build on a site like this was daunting." Davis laid the couple’s fears to rest by introducing them to a neighbor, Kevin Ebberts, who has been building custom homes in the mountains for 13 years. Five of those projects were log homes. Ebberts assured the Wammocks that their property was well suited for the type of home they wanted. 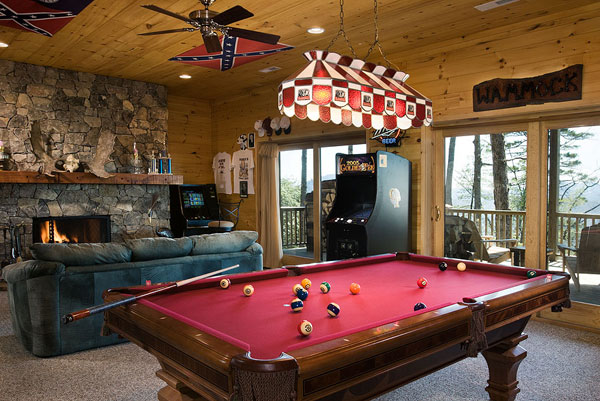 Boredom is never an issue at the Wammock home — when the billiards and arcade games aren’t enough, guests can step outside to enjoy the magnificent view.

The site was not without its challenges, however. The mountains of western North Carolina are reputed to be the oldest in the world and are formed of solid granite. Fortunately, the Wammocks’ site required blasting in only two small areas. But then the downhill side of the lot had to be reinforced with a heavy-duty structural concrete wall system. The engineering required for the foundation was critical for structural integrity and increased the cost of construction, but the benefits of the hillside placement to take advantage of the magnificent mountain views far exceeded the additional cost.

Another concern was breaking ground in February. Ebberts, a native of Buffalo, New York, assured the Wammocks that a little snow and cold wouldn’t delay the project, which took a mere eight months to complete. While their home was being built, Jimmy and Dillie stayed across the street at Henry and Gail Davis’s house, allowing them to be on-site much of the time. "We were able to help Kevin out by running around for him, fetching miscellaneous materials that he needed, so he could stay focused on building rather than driving up and down the mountainside for building supplies," Dillie says. "Other than that, we tried to stay out of his way and concentrated on clearing the yards." 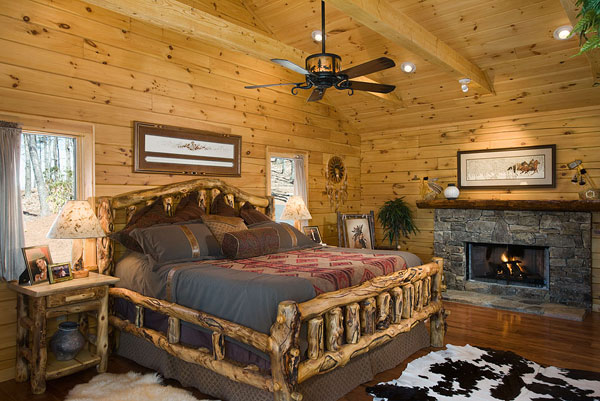 Desiring a completely different look from their Alabama seaside home, the Wammocks embraced a western design motif, especially evident in their master bedroom. Furnishings include a cowhide rug and a Bev Doolittle print above the Tennessee fieldstone fireplace.

When the Wammocks weren’t at the site, Ebberts e-mailed them progress photos of the construction and recommended modifications that he felt would improve the home. Because Kuhns Bros. Log Homes had produced the five log homes that Ebberts built before this one, the couple chose the Pennsylvania company to provide theirs. They started with the design. "The Wammocks’ plan was modified from one of Kuhns Bros.’ models," company sales representative Joe Rucci recalls. "The couple supplied me with sketches, magazine photos and plenty of verbal description of what they were looking for." Pointing out the value of teamwork at every stage of the project, Rucci credits Ebberts for most of the creative guidance in the design process. "Kevin made rough drawings that I converted to finished drawings, then Kuhns Bros.’ engineering department converted the drawings to blueprints and provided engineering seals and energy calculations as required by local building codes."

The logs used for the 4,323-square-foot home are 6-by-8-inch D-profile with dovetail corners. They’re milled eastern white pine, kiln dried for five weeks. Although the company’s log package provided most of the building materials, including windows and doors, the Wammocks saved money by buying certain items, such as decking, locally. Ebberts built the deck railings out of native mountain laurel obtained locally. 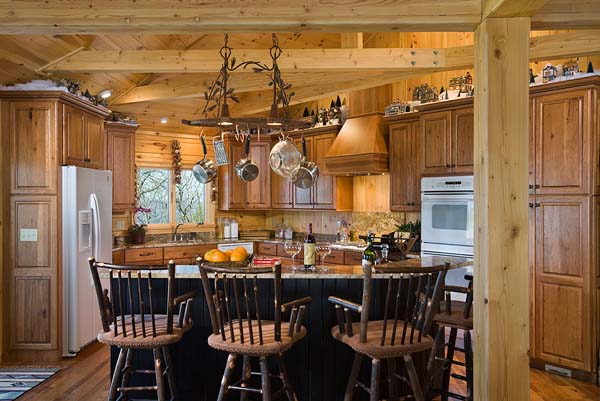 Even before their home was finished, Jimmy and Dillie began to feel a strong local connection. "People would drive by and see us working the land, also noticing a new log house going up," Jimmy says. "They would stop and chat with us, and before you knew it, we would be promising to get together for dinner. There are so many obvious reasons for wanting to be here in the North Carolina mountains, but by far the greatest reason is the local folks." Dillie and Jimmy divide their time between the Gulf of Mexico and the mountains in 10-day to two-week increments. They like all four seasons at both locations, so they tend to travel from one home to the other when the mood strikes. "We have the best of both worlds," Dillie says.