Happy Together | A Cozy Fishing Lodge in Oregon

A veteran Northwest log-home builder takes a year off to build his own cozy, custom abode.

The hand-carved sign above the front door of the unassuming log home reads: Neary's Fishing Camp. The fine print should read: 100 percent family made. Mike considered using faux stone for his fireplace, but eventually decided on native river rock for the oversized hearth. "I wanted to build a large fireplace, without sacrificing the cozy feel of the room," he says.
Step inside the cozy 2,800-square-foot custom log home and you can't help but feel like you're stepping back in time. The darkly stained hand-hewn Douglas fir logs (including one behemoth 30-inch vertical log that defines the sweeping staircase) are reminiscent of those used in Oregon's own Timberline Lodge, a national landmark constructed from mammoth logs in 1937. Even the soaring windows, showcasing majestic views of the Deschutes River, mimic Timber-line's view of Mt. Hood. For Mike Neary, owner of Oregon Log Home Company in Maupin, Oregon, these nostalgic elements shout: "Home at last!" 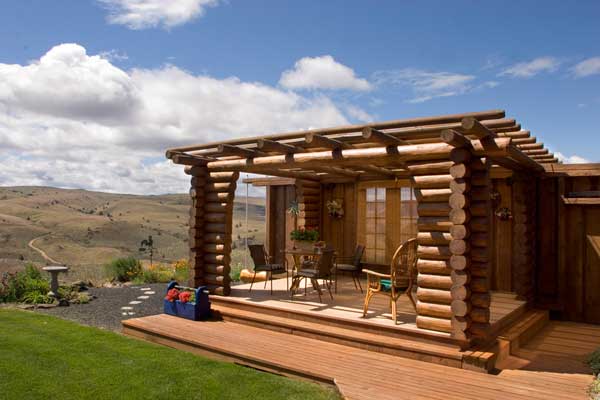 The Nearys built this log pergola as a refuge from Maupin's hot summer sun. It features a sunshade cloth overhead and Jeld-Wen French doors.

Designing and building the Nearys' log home was truly a family project. The journey began back in 1999, when Mike purchased a sawmill in Maupin, a small town in central Oregon known for little more than river rafting and fishing. He bought the sawmill so his crew could have a place to work indoors on the Disney Fort Wilderness project. The adjacent land, an expansive ridge that overlooks the Deschutes River, came with the deal. 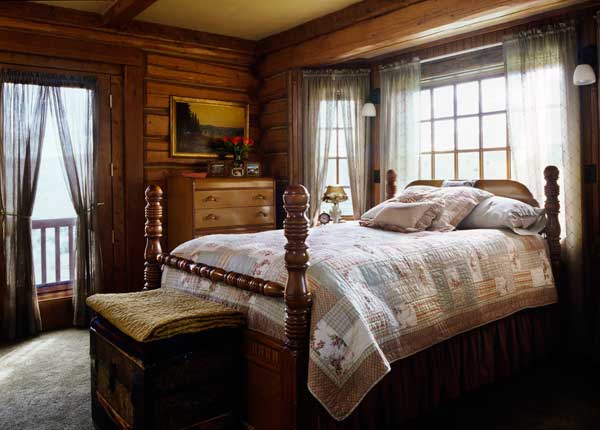 "Four years ago I decided to start a community here," says Mike. The Nearys were the first to build their year-round home on the land now known as RiverCrest Village. At the time of construction, the conditions were primitive at best. "There was no electricity," recalls Mike with a groan. "We lived out of a trailer and slept in a yurt tent. We built the entire house using two generators—both of which we burnt out!" 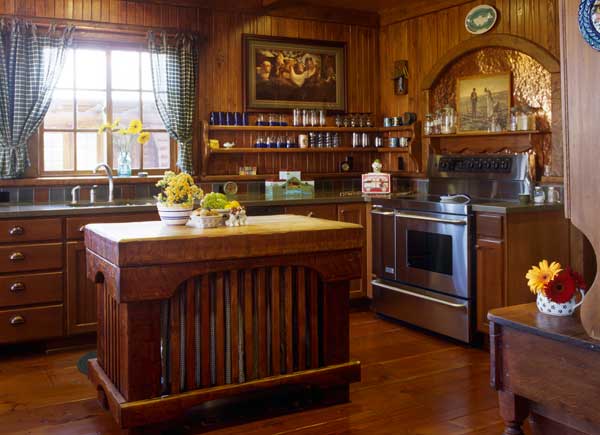 "It was so much fun," adds Patti, who worked alongside her husband on the project. Simultaneously, their sons Chris and Andy, who work for Oregon Log Homes, were putting the home together from a handcrafted log shell using a technique where an engineered pin is placed in the log walls at designated, load-bearing points. "This accommodates the settling, even if the logs shrink a bit," explains Mike, who was one of the first log home builders to work with this system. 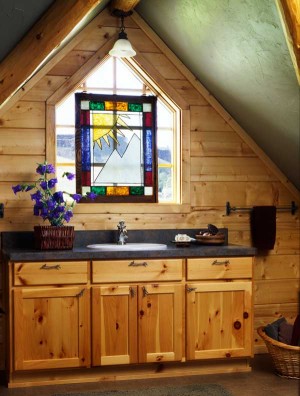 Patti made the stained-glass piece that hangs in the window of the upstairs guest bathroom. Light lodgepole-pine cabinetry blends perfectly with the practical Formica countertop.

When it came to the home's interior, Patti took the reins. She designed the country kitchen, including the textured walls and the hammered-copper inset behind the stove. She also chose all the home's furnishings, and lighting and made all the window treatments herself, not to mention the shower curtains.   "I learned how to use a lot of power tools in the process," says Patti with a satisfied grin. "You're a little bit humbled when you get around machinery like that. Needless to say, you have to pay attention." "The whole project was a blast," says Mike, who explains how they finally got power to the house at the end of the yearlong building period. "I got to take a year off from sitting behind a desk, and we had the time of our lives." "It just felt like home instantly," adds Patti. "The warmth of the wood surrounds you, and you feel really safe here. The second our guests walk through the door, they can't help but feel at home, too." For more information on the Nearys' building project, check out the May 2006 issue of Log Home Design.