A Tennessee couple pitches in to build their dream. Very few people head for the movies and wind up buying 16 acres of land instead of popcorn. That’s what happened to Dennis and Sharon Gros, however. The couple wasn’t even searching for property when they noticed the wooded parcel just 18 miles from downtown Nashville. They didn’t hesitate.

“Part of our decision to purchase the acreage is a result of my volunteer work with Happy Tales Humane in Franklin, Tennessee, which is a no-kill rescue shelter,” Sharon says. “I wanted to be able to foster dogs, but our property in Brentwood wasn’t large enough.” At the time, Nashville was spreading southward, but the Groses could still afford property in Williamson County. Once the sale was final, they “contemplated the possibility of a log home, which we find very attractive,” Dennis recalls. “However, we weren’t familiar with the construction costs associated with such a venture.”

Even after reading about log homes, the couple continued to waver, unsure of the details of log construction. They felt it might be safer to buy a stick-built home but decided to give log homes one more try. They signed up to tour a home by Honest Abe Log Homes. 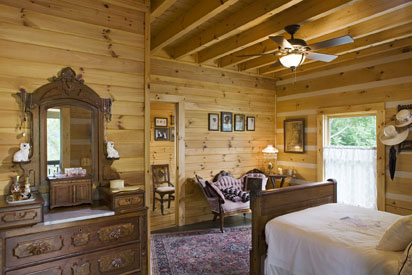 feel to this bedroom

“I quickly became enamored of the stripes created by the chinking between the hand-hewn square logs,” Dennis says. “They form such a fascinating architectural design element, especially at the corners.” Over the next year, the couple toured eight or nine other homes.

They were impressed with how the homes are built and learned that Honest Abe Log Homes erected the shell, including all of the interior framing, windows, doors and porch. What was left could be completed by subcontractors. They reckoned that by serving as their own general contractor, they could bring the cost for logs close to that of conventional construction. 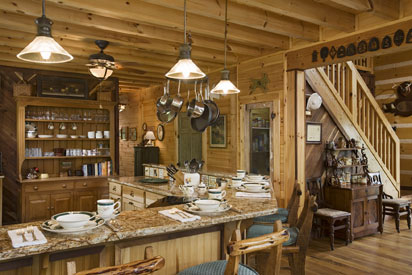 Everything has a place in this well organized rustic kitchen

Even though Williamson County doesn’t require a contractor’s license to build your own home, Sharon wanted to learn as much as she could. She enrolled in a two-week contractor training school. Then she contacted some neighbors who had built an Honest Abe home for the list of subcontractors they had employed. Dennis and Sharon designed their home from a sketch.

“We wanted the home to be less than 3,000 square feet yet have at least four bedrooms and three bathrooms for potential resale purposes,” Dennis recalls. “We visited a two-story home with a 30-by-60-foot footprint, just across the holler, which had been built by the gentleman from whom we purchased our land, to give us a visual sense of what would be possible in that amount of space.” 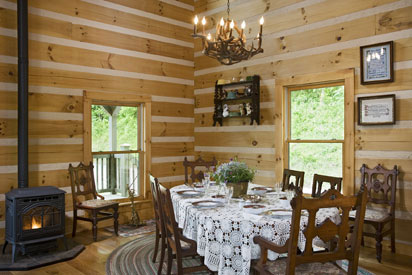 The dining area sets the scene for this vintage-styled home

After Honest Abe’s crew dried in the home, Sharon took over directing its completion. When the home was finished, the Groses had an 1,800-square-foot main floor that includes the great room with dining area and kitchen, a hallway with a master bedroom suite on one side; on the other, a guest bedroom and full bath, which also serves as the powder room. The homeowners eliminated the standard laundry room by stacking washer and dryer in the master closet, along with a small utility sink.

More about this home including the two-bedroom loft, ran in the July 2008 issue of Log Homes Illustrated.
★