Natural beauty seamlessly blends with form and function in this home along a northern Wisconsin lakeshore.

The expansive views of the 3,700-acre Fence Lake in northern Wisconsin were key elements in the design of the Wilkes residence, which takes full advantage of the gradual slope to the water’s edge.

The steep-pitched, varied peaks of the home’s roof-line effectively shed snow during the tough Wisconsin winters, but they also give the grand house storybook charm.

The team at Tomahawk Log & Country Homes developed a design that took maximum advantage of the sloping site. Pine trees that were harvested as the lot was cleared were sent to Tomahawk’s manufacturing facility for use in future log home projects.

The staircase to the upper floor of the Wilkes’ home is accented with style. “The log staircase is unique,” says Tom Wyles of Tomahawk Log & Country Homes. “I’m fascinated when I look at its black, wrought-iron spindle system. We did our very best to keep up with everything that Jim and Donna wanted.”

The open-concept great room, dining room and kitchen allow family and friends to visit and enjoy each other’s company without separation. “The fire is cozy in the wintertime, and that space is perfect for two or for a group of people,” Jim comments. “The dining room is also ideal for cocktails during food preparation or card games after dinner.”

The cathedral window and the inviting fireplace present a cozy area for family and friends to congregate. The full-log beams provide dramatic accents to this popular spot as well.

Structural white and red pine is accented with cabinetry constructed of knotty hickory. The kitchen reveals the artistry of Don Beck Cabinetry in central Wisconsin.

The wine cellar’s unique floor is covered in 26,000 pennies that Donna and her best friend, Mary Sabo, spent a New Year’s weekend spacing and gluing into place, and the $260 investment was completed with spectacular results. All the pennies are heads-up except for 27 wheat pennies placed tails-up for contrast. “We used black grout between the pennies and sealed it with a clear epoxy,” Jim explains. “It gives the illusion of walking onto a wet floor.”

The lower level of the home includes a variety of fun amenities. “We have a full bar and game table with bar stools and seating all around,” says Donna. The bar itself was constructed from a large oak tree that had died on the couple’s Wisconsin Rapids property. Jim comments: “I hated to see that beautiful tree go to waste.”

Donna loves the expansive three-season porch that adds outstanding living space to the home and captures nature’s transformations in comfort. “That is my go-to place,” she remarks. “I can see the water and hear the rain on the roof. It’s really popular when we have visitors.”

The expansive views of the 3,700-acre Fence Lake in northern Wisconsin were key elements in the design of the Wilkes residence, which takes full advantage of the gradual slope to the water’s edge.

Written by Adam Headley
Photography by Glenn Sanderson
The lure of Fence Lake and the surrounding forests of towering pines and beautiful birches were nothing new to Jim and Donna Wilkes. It captured their hearts years ago.
When the couple acquired a small cabin and two-plus acres of land on the shore, they knew it was a place they would eagerly return to. So, when their plans evolved to permanent residency, the adventure was dramatic and satisfying.
“We’re only the third owners of this property,” relays Jim, a retired orthopedic surgeon who practiced in the city of Wisconsin Rapids for 32 years. “When we bought it, there was an old cabin, built in 1948, that had been added onto later. It included two bedrooms, one bath, a small kitchen and a living room. We got up here regularly two or three weekends a month.”
The land by the lake quickly became a favorite spot for rest and relaxation. But as their children grew up, married and had kids of their own, it became clear that the family’s collective heart was beside the shimmering 3,700-acre body of water where game fish are plentiful, the forest is peaceful and the home of a lifetime would begin to take shape — first in the minds of the creative couple, and then in the amazing results they achieved in partnership with Tomahawk Log & Country Homes. 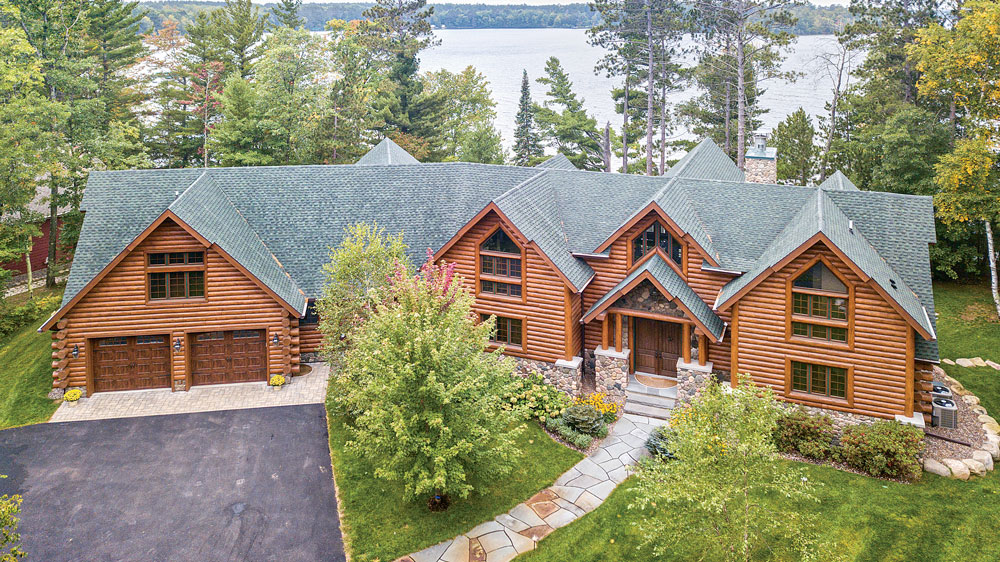 Jim and Donna were already experienced with custom construction, having built their primary residence in Wisconsin Rapids, so, they were practiced in the art of decision making on large undertaking such as this.
“Donna and I had talked about a log home, and we knew we wanted that look and feel,” says Jim. “We opted for half-log. We toured some log homes and went to shows with ideas in mind.”
Donna echoes: “We realized this is where our children and our grandchildren want to be. So, we decided to sell our Wisconsin Rapids house and live here full-time. We wanted to make it a comfortable and cozy home, where family, friends and even dogs could plop down on a sofa and relax in a wonderful gathering space.”
Donna and Jim have three grown children. Son, Kyle, and son-in-law, Justin, both proposed to their spouses on the home’s dock, and two of the couple’s grandchildren were born while construction of the house was underway. It was clear that this place held a special place in the family’s hearts even before it was built.
In fact, the journey actually began well before the small cabin was razed and ground was broken on the new home. As they considered a log home partner, Tomahawk became the logical choice. 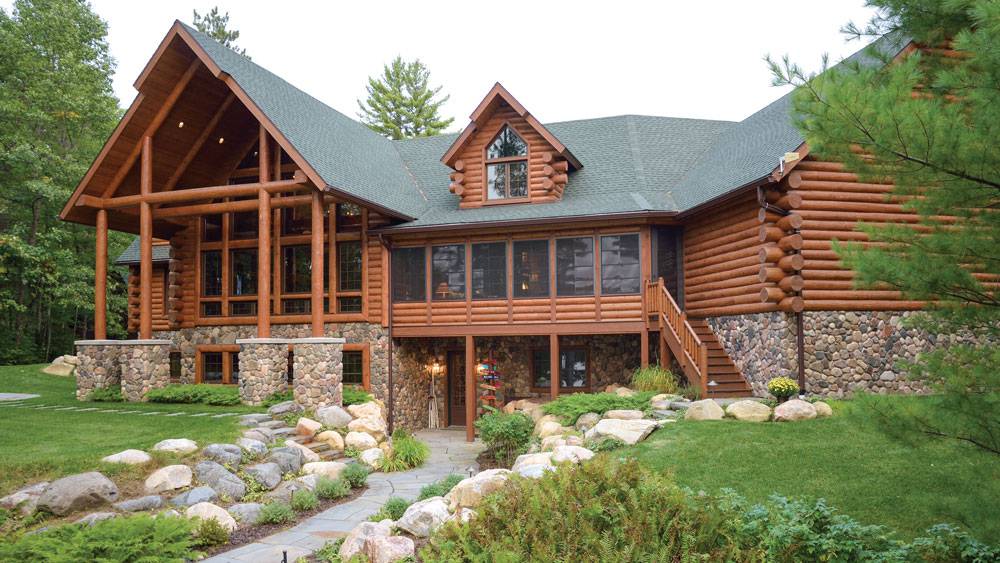 “We had a good feeling about them, and they were willing to work with us,” Jim comments, admitting that he and Donna switched gears on the company and its owner, Tom Wyles, midway through the project.  “We threw it out our original plan and did something totally different, once we decided this would be our family gathering place as well as our retirement home.”

Tom and the folks at Tomahawk Log & Country Homes have participated in projects across the United States with more than 2,500 completed, so they were accustomed to changing priorities resulting in altered plans. The cooperative effort with the Wilkes became a tour de force.
“Jim and Donna had the ability to visualize and create the things they were really looking for in their dream home, and I believe we exceeded their expectations, from needs to wants and from start to finish. We got everything figured out,” he shares.
Tomahawk developed a design that took maximum advantage of the sloping homesite, and the finished product included the main house along with a 300-square foot boathouse at the water’s edge. A small 12-by-18-foot bunkhouse with two sets of bunk beds remains as the only original 1940s structure on the property. 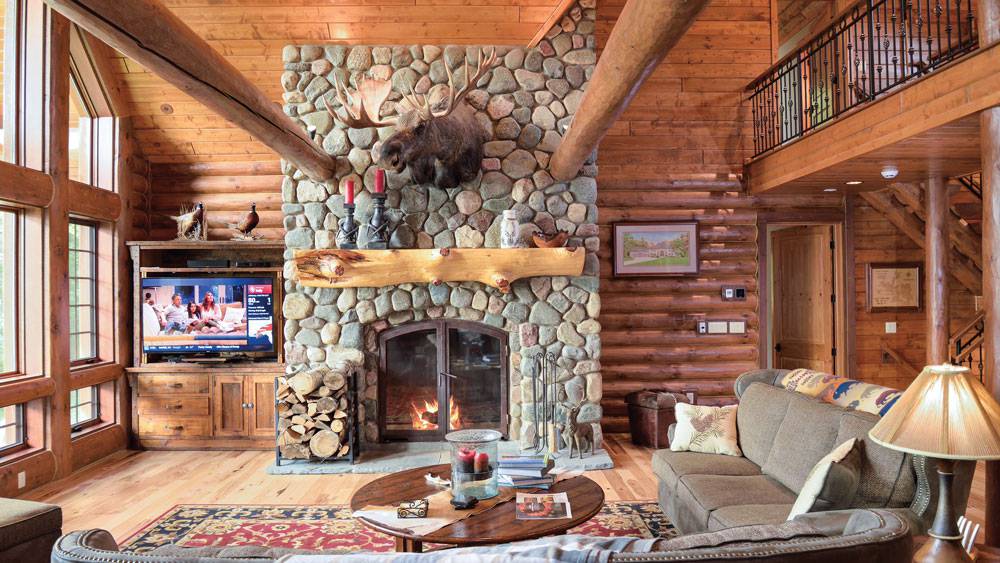 “I like to pretend the home is for me and ask myself what I would want,” explains Tom of his process. “Then, if there are 10 different ways to do something, we present all 10 and let our clients choose from the possibilities. Often our relationships start out as customers working with providers, but along the way we become friends, and it allows us to continue with the enjoyment of creating dream homes.”
Inside the Wilkes’ homestead, that attention to detail becomes evident. From the serene setting to the open floor plan to the stunning lake views, a family has found its forever home, its center of gravity and enduring grace.
“Wherever Jim and Donna go throughout the home, they can enjoy themselves. And when others see it, their jaws drop,” says Tom. “There’s tremendous ‘wow’ factor here.”