Drawing inspiration from previously built log homes and plans, a creative couple personalizes their own hybrid haven on the shores of Ontario’s Pigeon Lake. 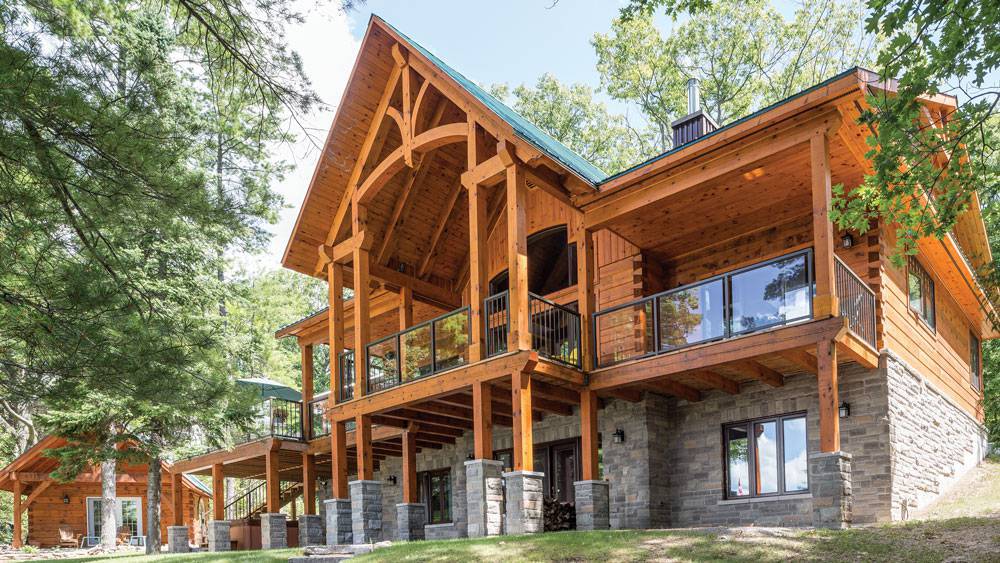 From the water’s edge, you can appreciate how the sloping lot is terraced to provide a variety of outdoor living spaces. “Outdoor living is important to this family, and thanks to those covered porches, they can be outside even if it’s pouring rain. If they want to enjoy the sunshine, there’s lots of opportunity for that on either side of that covered porch, too,” Rich says. “Plus there’s a massive screened-in porch for when it’s buggy.” The dark ebony stained cabinetry and the natural clear coat on the pine walls are distinctive and very personal design choices, but one that Rich Kinsman definitely sees trending. “You either love it or you don’t, but either way, the result is striking,” he says. All of the trusses in the great room are purely decorative. The log structure went up first, then the trusses followed. This can result in some cost savings for people who want this look. Confederation’s Rich Kinsman explains how: “If the frame is structural, the design may require you to have five trusses to support the weight, where if it’s decorative, you could get away with three and achieve the same effect.” 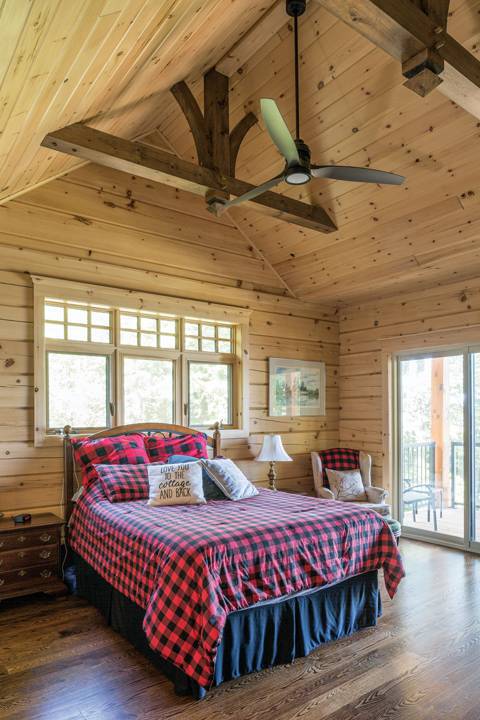 Natural light is the key behind the gleam in this cozy master bedroom. Here, the purely decorative trusses disappear into the pine tongue-and-groove ceiling treatment, carrying the log-and-timber hybrid approach into the most private of spaces in the home. From the water’s edge, you can appreciate how the sloping lot is terraced to provide a variety of outdoor living spaces. “Outdoor living is important to this family, and thanks to those covered porches, they can be outside even if it’s pouring rain. If they want to enjoy the sunshine, there’s lots of opportunity for that on either side of that covered porch, too,” Rich says. “Plus there’s a massive screened-in porch for when it’s buggy.”

Photos by Kelly Thompson, Courtesy of 1867 Confederation Log & Timber Frame
When the owners of this 3,260-square-foot log-and-timber hybrid sought out Ontario-based 1867 Confederation Log & Timber Frame, they came with a dramatic waterfront lot and a deliberate plan in mind. They knew exactly where they wanted the house to go, the views they wanted to capture and which rooms needed to showcase those views.
They also knew exactly where to start.
The couple had seen Confederation’s “Green Woods” model and fell in love with the design, but according to company VP Rich Kinsman, they, like every other customer, tweaked it to make it their own. A few key changes were expanding the footprint slightly, adjusting the entryway and — most significantly — adding the 263-square-foot sunroom. “There were a dozen or so little changes, but if you put the two plans side by side, you’d see that it is very close to the original,” Rich says.
One of the things that drew the clients to the layout is that plan supports single-level living, an important consideration for the couple as they approach retirement. “Knowing this was their forever home, they took their time and made sure they had everything they wanted,” Rich says.
This included ensuring there’d be plenty of room for their grown kids, as well as extended family and friends, to visit. Only the master bedroom is located on the main level, but just downstairs lays a visitor’s haven.
The lower-level floor plan has three dedicated bedrooms, but the storage area, which has its own closet, could easily be converted to a fourth bedroom, if needed. However, there’s only one bathroom on this level. “These bedrooms won’t all be occupied at the same time, so our clients felt one bathroom would be sufficient and economical,” Rich explains.
When it comes to the bones of the house, the square-cut white pine logs with dovetailed corners are structural, as is the timber framing on the lakeside deck and some of the interior post-and-beam members. “The truss system is a king-post with an arched collar tie,” Rich says. “Some of the other timber elements, like the ones in the master bedroom, are purely cosmetic. But that’s one thing about what we do; whether it’s decorative or structural, it’s hard to tell the difference.”
Just as the “Green Woods” influenced the home’s layout, the heart of the home — the kitchen — was inspired from another Confederation house, the “Elwood.”
“We did a dark kitchen in the Elwood, and these clients really liked that, so they incorporated that same idea into their own place,” shares Rich. To that end, the cabinets are stained an elegant charcoal tone, but it’s not opaque, so you can still appreciate the wood grain. The log walls and wood ceiling are natural and bright.
Though the home originated from bits and pieces of other Confederation houses, it now has pride of place as its own unique design. Dubbed “The Great Escape,” the clever cottage is sure to be the springboard of many future hybrid log-and-timber retreats to come.

See all the winners of our 2021 Best Log & Timber Homes of the Year contest here!