What's the Difference Between a Builder and a General Contractor?

Relationships, accountability and service lie at the heart of who you should hire to oversee the construction of your log home. So what's the difference between a builder and a general contractor? Read on to discover the differences.


In the world of custom log home construction, there’s a question that comes up time and again: “Should I hire a builder or a general contractor to construct my home?”
It’s a valid question, but not one with a clear-cut answer.

There is an extremely fine line between a “general contractor” (GC) and a “builder.” Both should be licensed by the state(s) in which they operate and work. That should be a given. In fact, in most states, a general contractor’s license is required for builders as well as those who are solely GCs. The distinction can be confusing for the consumer, but there are a few subtleties that should be understood.

See also Heart Wood vs Sap Wood: What Does It Mean?

Often, the definition between the two depends a lot on where you live in the country. In some areas, a GC and a builder are one and the same. That’s how it is in my home state of Tennessee. I actually hold a general contractor’s license myself; however, I qualify myself as a “builder” and here’s why:


What is a General Contractor?

For the most part, when people are weighing whether they should hire a GC or a builder, the biggest difference lies in the relationships between that person and the trade contractors.
A GC typically is an individual who manages an assortment of independent trades, including builders and framers. He doesn’t necessarily have his own crew working under his umbrella full time. Instead, a GC will take on the project; submit the plans to multiple construction and trade contractors for bid; and select his team based on quality, value and service. Once the team is assembled, he is responsible for scheduling and managing those individuals throughout the entire process, though he typically will deploy a site supervisor to oversee daily activities on site.


What is a Builder?

A builder works in a similar way, except a builder typically has his own crew. He’ll personally employ most of the people who will work on the job site. Depending on the size of his business, the trade contractors he may not have in-house are specialists like electricians or HVAC pros, but he often has trusted partners in these areas with whom he frequently works. And more often than not, you’ll see a builder participating in construction activities on the site (i.e., swinging the hammer) and personally overseeing the work being done by the team.
There’s a perception that a builder has a closer personal relationship with a client than does a GC, and this can play out in myriad ways.

For example, due to the nature of his managerial role, a GC will build precisely what is laid out on the plan without question. A builder, however, may look at a plan and see ways to improve it or save money on design or materials, and then convey those suggestions to you. For most builders, a project is as much a reflection of him and his talents as it is the of owner’s vision. This is not to suggest that GCs don’t take pride in their work — they absolutely do! However, the relationship with a builder typically is a more intimate experience. It boils down to a difference in philosophy.

But because a builder is more hands-on (in most cases), he can’t take on as many projects simultaneously as a GC can. A GC typically works on volume versus a builder who may sign on for one or two houses at a time. This could create a price disparity between the two, but one option may not be significantly less expensive than the other. Construction costs are more reliant upon the local labor market, as well as the size, materials and complexity of the home.

As you’re factoring cost into the equation, keep in mind that when you’re making an investment as large as a custom log home, you’re not buying on price alone. You need to consider service and what type of relationship you want to have with the person who is responsible for the construction of your home. This, combined with checking references and examining their work firsthand, will help you make the personnel decision that’s right for you.

About our author
Dan Mitchell owns Eagle CDI in Tennessee and has built close to 100 log homes in his 30-year career. He is the 2017 President of the Greater Knoxville HBA. 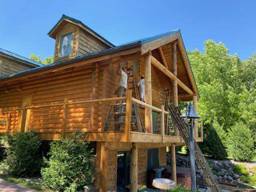 Behind the Buzzword: Hybrid Homes