You can take the girl out of Montana, but sooner or later she’ll come back.

The kitchen’s custom cabinets were built from reclaimed Douglas fir.  The black enameled range — Linda’s pride and joy — is a vintage-style Heartland appliance. The counters are genuine soapstone.

The massive stone fireplace was built with rocks hand selected from the Madison River, no more than 20 miles away from the cabin. Shades of pink, gray and blue offer a cool contrast to the warmth of the logs.

Linda runs her ranch from this home office, which is light and bright thanks to an internal window into the great room.

Though the dining area is fairly informal, it’s nonetheless spectacular. Views of towering Hilgard Peak (from which her builder takes its name) lie just beyond the windows.

Most of Linda’s furniture dates from the 1920s and 30s, purchased over the years from antique stores. The period pieces are similar to furnishings that were in the family cabin of Linda’s youth.

A clawfoot tub brings Linda’s passion for all things vintage to one of the home’s three bathrooms.

Perched high in the rafters, the sleeping loft is a romantic, cozy space where overnight guests clamor to stay. Here, you can’t help but get up-close-and-personal with the hand-scribed Douglas fir timbers and the craftsmanship of the construction.

Architect Jamie Logan came up with the idea of curving the expansive screened-in porch, which is a great place to host parties. For her dad’s 90th birthday, Linda entertained more than 60 people in the space with ease.

Running a 440-acre ranch is a huge responsibility, but with a landscape such as this, it’s no wonder Linda never wants to leave.

"I’m in love with Montana. For other states I have admiration, respect, recognition, even some affection. But with Montana, it is love. And it’s difficult to analyze love when you’re in it,” writes  John Steinbeck in his travelogue, "Travels with Charley: In Search of America."

Steinbeck is not alone in his opinion of Big Sky Country. Just ask the owner of this Hebgen Lake hideaway. It’s been a long path for Linda, a longtime summer visitor who now calls Montana home. She cherishes memories of growing up on Hebgen Lake. Surrounded by evergreen forests and snow-capped peaks, this pristine lake is a stone’s throw from Yellowstone National Park.
Every summer, Linda’s family left Utah and gathered at her grandparents’ retreat. “It was a beautiful little log cabin – hand-built in 1932, dovetailed and chinked,” she recalls. The simple layout featured a central living and dining area flanked on one end by two bedrooms, and a kitchen and third bedroom on the other. Young cousins shared the two sleeping lofts.
Like others dotting the lakeshore, the cabin was primitive: no electricity and strictly seasonal. West Yellowstone is snow country, so come winter, access roads were (and still are) impassable. “In the old days,” says Linda, “we used to get 8 feet of snow. It used to cover the windows.” Though the snowpack has dropped in recent years to a “mere” 5 to 6 feet annually, it’s nearly June before it melts. 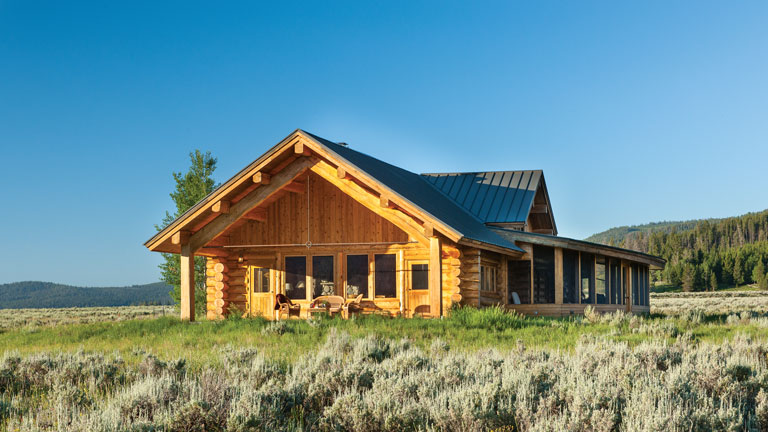 Linda, along with her brother and sister, did chores, from splitting firewood for the wood stove that heated the cabin’s interior to filling the water bucket from an outdoor spigot. “I was the oldest and a girl, so I washed a lot of dishes,” she adds. But afterwards, the youngsters could play.

Time went by. Linda went off to college in Seattle and stayed there after graduation. She continued to summer at Hebgen, but life in the city was stressful. She longed for home. So in the early 90s, Linda traded her Seattle abode for a house in Bozeman, two hours north of Hebgen. There, she began to dream of owning her own cabin getaway.
Linda was thrilled to find a 200-acre parcel in a sagebrush meadow, adjacent to a guest ranch. Architect Jamie Logan of J. Logan Architects in Boulder, Colorado, and Blair Anderson of West Yellowstone, Montana-based Hilgard Log Builders, teamed up to craft a cozy retreat for Linda. Jamie is an award-winning architect noted for sustainable design and green building practices, while Hilgard specializes in handcrafted log homes. The resulting 1,000-square-foot log cabin was hand-hewn and chinked – a tribute to Linda’s grandparents’ place.
But a few years later, Linda learned that the neighboring guest ranch had been subdivided and the owner planned to sell. “This is the only low-bank waterfront that’s not dense trees to the lake,” she emphasizes.
Determined to preserve both waterfront and the historic ranch, Linda bought the 440-acre spread. With little business experience – “I was so naïve,” she says in hindsight – Linda set about restoring the 1940s rustic lodge to its former glory. 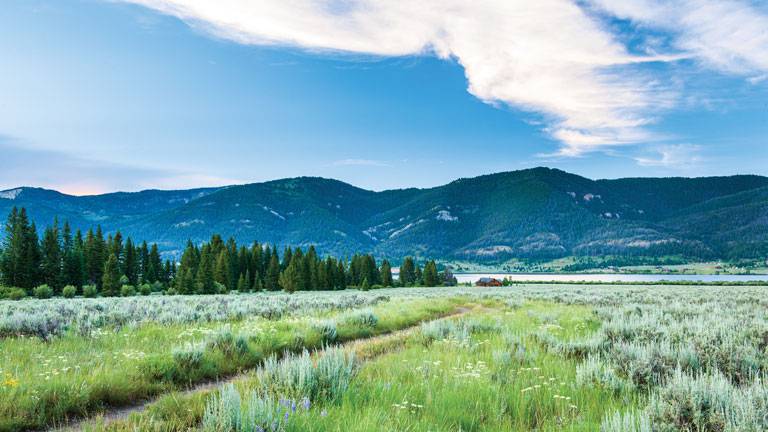 It wasn’t long before Linda felt she needed a bigger place, herself. “I wanted space for my daughter and her friends, and to be able to separate family life from work life,” she says. On the wish list: a great room where everyone could hang out, a sleeping porch and, given the responsibility of running the ranch, an office.  So she again turned to Jamie and Blair to design a second cabin. The three make a good team. “Linda communicates so well and is able to express what she wants,” says Blair. “And Jamie can envision a house before he puts it on paper. He’s incredible.”

Jamie made several visits to the property to determine the plan. “For me, I try to set up a good relationship with the site,” he comments. “I spent quite a bit of time wandering up and down the creek, trying to decide the location.”
Once the trio agreed on the best spot, orientation was paramount. “I’m passionate about the views,” states Linda. Hebgen lies at the foot of the towering Centennial, Madison and Gallatin ranges. Hilgard Peak, at roughly 11,000 feet, is the highest in the Madison range, and is the first to get snow. “It’s beautiful,” Linda sighs.
“The views of the lake are tremendous,” agrees Blair, who notes that this is one of his favorite projects. “The view east beyond the lake to the Madison River Canyon in Yellowstone — basically the headwaters of the Madison — is fantastic.”
Blair and Jamie collaborated on room dimensions and the rough sizes of logs. “Blair’s one of the better log builders in the country,” praises Jamie. “He knows what works.”
All of the logs were sourced locally and responsibly from trees that were predesignated for harvesting. The lodgepole pine for the walls came from the lake region of Yellowstone Park, where a parking lot was being expanded. The hefty Douglas fir logs that support the roof were felled as hazard trees at a nearby ski resort. 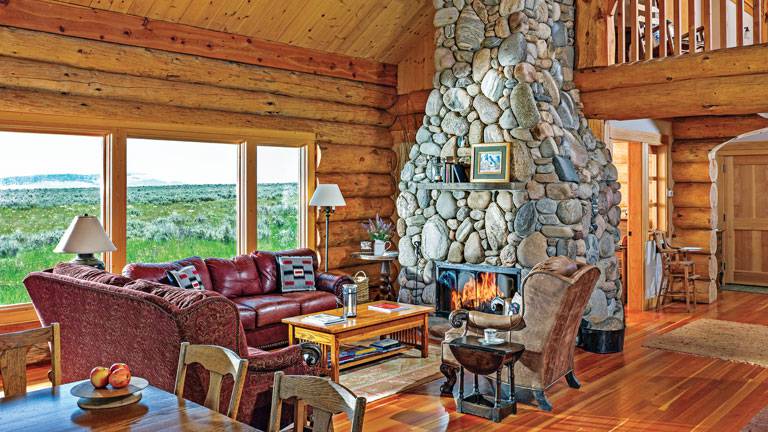 Because Linda wanted a sense of spaciousness, the great room is open to the rafters. It was also important that the cabin be bright and airy. “A lot of traditional cabins are very dark,” she notes. A skylight straddles the roof ridge, filling the interior with natural light throughout the day. Additional skylights over the bedrooms and an east-facing dormer over the great room pull in extra light, creating a feeling of spaciousness.
The large kitchen is totally open to the great room. “When you have people over, you want to visit with everyone,” says Linda. Since she works 12-hour days at the ranch, visiting family and friends pitch in with meal prep. Linda’s pride and joy is a big Heartland stove, a nod to the old wood stove in her grandparents’ cabin. Instead of a warming oven above, the Heartland has an electric fan. There are few upper cabinets to block the view.
Jamie came up with the idea of curving the screened sleeping porch, which boasts 180-degree views of the creek and the mountains. “We can hang out on the porch,” says Linda, “and not get devoured by mosquitoes.” It’s a great space to host parties, like the celebration of her dad’s 90th birthday. “We had over 60 people,” Linda recalls. The porch is also her favorite spot to read and relax when she’s not busy at the ranch. If she has time in the afternoon, she might slip away from work to nap on the queen-size bed there, or just listen to the birds sing and the wind rustling the tall spruce trees along the creek.
“It’s wonderful to come home and unwind,” professes Linda. “This is my retreat from my other life.”