A desire for winding roads drove these Harley-riding retirees to build a modern-rustic getaway in the North Georgia mountains.

Blending natural elements, such as wood and rock, is a specialty of Modern Rustic Homes. It’s a beautiful combination, but care must be taken that the log walls are able to move as they settle against the static stone. A garage to the right of the home’s entrance stores the couple’s Harley Davidson motorcycles.

Remembering their days of renting cabins with sparsely lit basement bedrooms, the Gantners equipped the lower level with plenty of windows. The floor, which is accessible by stairs and an elevator, also contains a pool hall and game room.

Blending natural elements, such as wood and rock, is a specialty of Modern Rustic Homes. It’s a beautiful combination, but care must be taken that the log walls are able to move as they settle against the static stone. A garage to the right of the home’s entrance stores the couple’s Harley Davidson motorcycles. The story of this Blue Ridge mountain retreat begins with a love of the road. Harley Davidson riders Don and Brenda Gantner were bored with the flat ground and unrelenting sun of their native South Florida, so they decided to ride north for the cool canopies and winding roads of North Georgia. They fell in love with the area and rented various cabins there for years. By the time they were ready to build, they knew exactly what they wanted.

While flipping through The 2016 Best Log & Timber Homes of the Year, the Gantners laid eyes on the Wild Turkey Lodge, a manifestation of their cabin dreams. “The name of the company first caught my eye,” Don says. “‘Modern Rustic Homes’ — that’s just what I want.” He drew up a preliminary floor plan himself and handed it over to Michael Grant, the company’s owner and head designer, who sized it to meet their needs and budget.

“The genesis of the specifications took their color palette and texture from the North Georgia mountains,” Michael says. “The Gantners and I discussed a blend to give the house a warm-but-rustic look, which is why you see a mix of dusty grays and browns, as well as wood, stone and some drywall.”

This blending of elements evokes the days of early log homes when materials were born of a home’s surroundings. The 6-by-12-inch eastern white pine square logs with dovetail corners are hand hewn to provide an authentic Appalachian texture. Hand-scraped floors match the aesthetic. The old-school beams and subtle woodwork of the ceiling are Don’s favorite part of his home, but more modern elements, like the fiber cement siding in the gables and dormers and the Lutron screens, which lower to provide shade in the afternoon, contribute from behind the scenes.

Most afternoons, the Gantners like to retire outside to enjoy their views with a cocktail in hand. “We’re huge on outdoor spaces,” says Brenda. “We extended the porches because we spend 75 percent of our time on the porches and decks. There’s cover so we can be out on the deck, by the fireplace or in the hot tub no matter the weather.”

The great room, located in the rear of the house, is filled with windows that showcases the mountain views. Custom cabinets flank the fireplace. The right side accommodates the television’s swinging arm hardware while the left side houses collectibles. The vaulted ceilings were veneered in Eastern white pine.

The absence of a traditional backsplash in favor of walls painted a muted grey gives the kitchen a clean, streamlined feel. A trio of pendant lights and high-backed barstools add style to the simple space.

High traffic areas, such as the dining room, benefit from durable floors. These hand-scraped floors were selected for their color and durability. Through the glass doors is a “living porch” equipped with a second dining table and wood burning fireplace. The covered space is a favorite gathering area year round and is a particularly popular hangout spot during happy hour.

A twig-style accent panel on the upper floor’s railing adds another layer of organic beauty to the home’s nature-inspired interior.

One of four bedroom suites, the master is encased in blue-pine paneling for a warm feel in the cool Blue Ridge Mountains.

This master bath exudes elegance, with white subway tile set in a herringbone pattern and a freestanding soaking tub topped with a dainty crystal chandelier.

A game room in the lower level is an ideal spot for entertaining, with a well-stocked bar and pool table.

The great room, located in the rear of the house, is filled with windows that showcases the mountain views. Custom cabinets flank the fireplace. The right side accommodates the television’s swinging arm hardware while the left side houses collectibles. The vaulted ceilings were veneered in Eastern white pine. While designing their home, the Gantners were determined to avoid the issues they experienced as renters. “We always had problems with master bedrooms,” Don says. “We would share the place with other motorcycle-riding friends and have to draw straws to see who would get the master.” To solve this, their home has four master suites, each equipped with its own bathroom and king-size bed. The basement bedroom has two large windows to keep things bright and airy.

As their “Happy Hour Retreat” sign denotes, the couple entertains often. “We figured everybody would come once after we finished, and that would be it,” says Brenda. “Now, every year they say, ‘Can we come back?’” But the Gantners don’t mind a bit. In fact, they say there’s nothing better than an evening soaking in the hot tub and grilling out on the deck with friends. Walk down their driveway after 5 p.m. and you can expect to find a host of Harleys parked outside with the sounds of libations and laughter echoing from the porch. You could say they are in “hog” (and log) heaven. 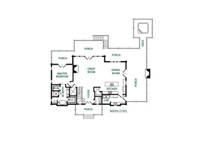