A log home getaway on 51 acres of remote Vermont countryside beckons family and friends, whether it's for a holiday celebration or just a little end-of-the-work-week R&R. 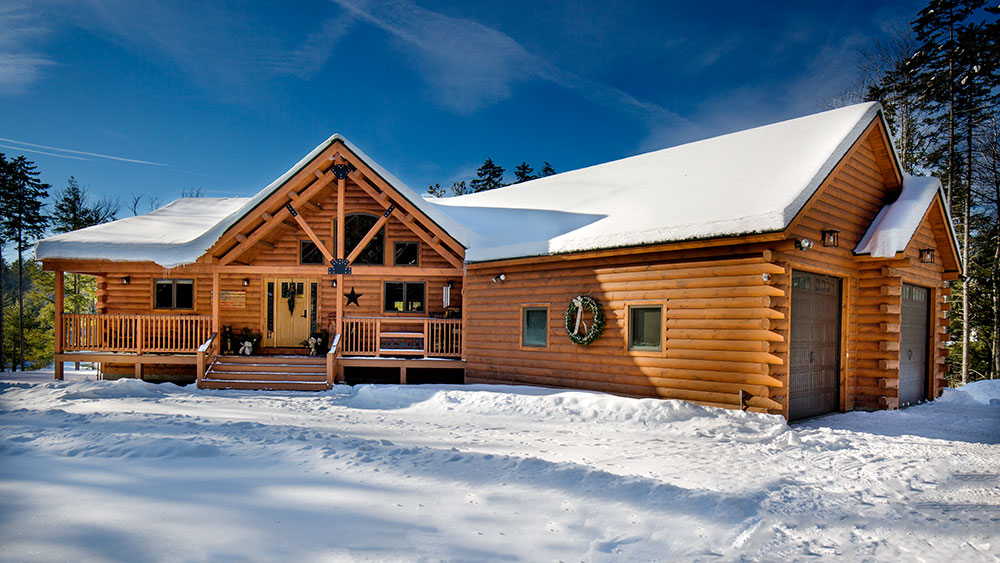 
There's something particularly idyllic about celebrating Christmastime in a snow-covered log home in Vermont.

“Our house and property are great all year long, but it’s extra special in the winter — especially during Christmas,” says owner Rich Conte, who built the home four years ago with his wife, Teri. “We love being outdoors, and we especially love winter sports like snowmobiling, snowshoeing, skating or playing hockey on a frozen pond. And we have all of that just steps outside our back door.”

Being outdoors and feeling far away from the crowds, traffic and business meetings that consume their weekday lives were the primary goals in early 2013, when the Contes began their search for a weekend retreat. They’d owned vacation homes in the past and knew the features, landscape and driving distance that would fit their needs best.

“Nothing we saw made the cut,” Teri says about the search that eventually led them to build their own home with full-log walls. “Every house we looked at needed major renovations, didn’t have the type of property we wanted or the land wasn’t big enough.”

Then they found two parcels near the Okemo Mountain ski resort in Ludlow, Vermont, a three-hour door-to-door drive from their home in Branford, Connecticut. The terrain had rolling meadows, pockets of soaring pines, rambling stone walls from the land’s early days as a sheep farm and abundant wildlife — including families of beavers hard at work building log homes of their own.

The Contes bought both parcels and searched for a builder and a construction style that would fit the rural landscape.

New Hampshire-based Coventry Log Homes helped the couple design a house that was a manageable size for the two empty nesters by themselves but could easily expand when their children or friends come for a stay.

The logs arrived in October 2013, just as Vermont found itself entering a colder-and-snowier-than-usual period. “It was so cold,” Rich says, “that the builders had to build a warming box to keep their nail guns from freezing up.”

Construction finished 13 months later. The beavers also had finished building their own log homes, and the resulting dam backed up the streams and turned some of the Contes’ meadows into small, picturesque lakes.

There’s a 1,200-foot-long driveway to the house, which, from the front, appears to be a modest ranch with extended gable porch roofs and generous decks. But friends and family step inside to see a much different personality emerge.

The floor-to-ceiling windows anchor the spacious, open floor plan. A wood-burning fireplace faced in stone stretches 13 feet wide and 12 feet tall. And then there are the beams. Thick horizontal purlins and tremendous trusses hold up tongue-and-groove planks and soar 20 feet at the highest point.


Seeing visitors’ reactions after they walk through the door and pause in the living room may never get old for Rich and Teri. “They come in, they look up and they take a deep breath,” Rich says. “They can smell the wood and the fresh air. You can actually see the stress roll off their shoulders. There’s just nothing better at the end of a long work at week.”
See also 5 Jaw-Dropping Log and Timber Great Rooms

The door and window casings, made from 1-by-4-inch pine boards, were sealed unstained to showcase the wood’s natural beauty. The cabinets are a simple Craftsman style that complements — but doesn’t compete with — the home’s structural features.

See also ﻿How to Make Your Log Home Picture-Worthy

The small but open floor plan provides direct lines of sight between the rooms and to the snowy scene outside. Black metal plates secure the strutted king-post trusses and serve as a decorative element.

Mindful that the log walls could absorb precious light, the Contes blended drywall and wood to keep the home airy and bright. “We also felt like adding drywall gave us more flexibility and the ability to add color with paint,” Teri says.

The master bath’s oversized dual-sink vanity ensures Rich and Teri each have plenty of personal space.

The finished lower level has two bedrooms, a bathroom, living area and doors that lead to a large fire pit. A wet bar and wine fridge mean the Contes and their guests don’t have to stray far for refreshments.

From the front, the Contes’ log home feels like a modest ranch; but step inside or swing around back and the home’s showier personality breaks through. Exposed purlins, massive trusses and extended gables grab visitors’ attention.

The rich exterior lighting and soft radiance of the fire pit make the Contes’ log cabin glow during a newly fallen snow.

The door and window casings, made from 1-by-4-inch pine boards, were sealed unstained to showcase the wood’s natural beauty. The cabinets are a simple Craftsman style that complements — but doesn’t compete with — the home’s structural features.