A Hilltop Home in the Great Smoky Mountains

A busy pediatric physician discovers a slower pace of life at this cliffhanger-of-a-vacation-home.

Living life on the edge can be a good thing. This hillside home delivers treetop views from nearly every room in the house. Additionally, homeowner John Low says the fauna is as visible as the flora, with rattlesnakes, bobcats, coyotes and bears frequently observed in their natural habitat.

To keep the views seamless, builder Alan Parcell lowered the rear porch. He explains: “That way when you are looking out of the living room windows with that great view, it is not being obstructed by anything on the porch.” The interiors are a study in all things rustic, from the hickory flooring and cabinetry to the slate-inspired porcelain tile and granite countertops with a chiseled-edge profile in the kitchen. Wood elements shine in the vaulted great room, which includes 16-inch-diameter ridge logs, round log trusses and  character posts on the handcrafted staircase. Alongside the logs and earthy tones, French doors that open to a serene covered porch bring nature into the master bedroom. The upstairs home office with private balcony is John’s favorite space in the house. “I have my desk that sits there at the double doors, so I can sit and look at my computer and over the mountains,” he says. Distinctive architectural elements in the home’s lower level include chinking between the logs, a stone hearth with reclaimed wood mantel and a timbered ceiling. From the rear deck, the sight lines down the valley to the Great Smoky Mountains are spectacular. “With the clouds and the changing light patterns, the view is always different,” says John.

Living life on the edge can be a good thing. This hillside home delivers treetop views from nearly every room in the house. Additionally, homeowner John Low says the fauna is as visible as the flora, with rattlesnakes, bobcats, coyotes and bears frequently observed in their natural habitat.

Written by Suzanna Logan
Photography courtesy of Yellowstone Log Homes
For many, an escape from everyday life means packing up and heading for the beach. But John Low’s year-round home is located where others go to vacation. So where does a doctor from coastal North Carolina head when it’s time to unwind? The mountains.
“I’ve always been a mountain person at heart,” he explains. “We were a beach family growing up, but the mountains and ocean are just two different worlds. The beach has lots of people and lots to do, but when I really want peace and solitude, the mountains feed into that.”
Through the years, whenever John could take time away from work, he’d make a beeline straight for the Great Smoky Mountains. But not just any accommodations would do. “Most of my vacations were always renting log homes,” he says.
After experiencing cabin life in rentals across western North Carolina over a number of decades, John was ready for a log home of his own. He purchased a lot with unbeatable 360-degree views of azure skies and pine-green horizons and began moving forward with plans for his hilltop hideaway. 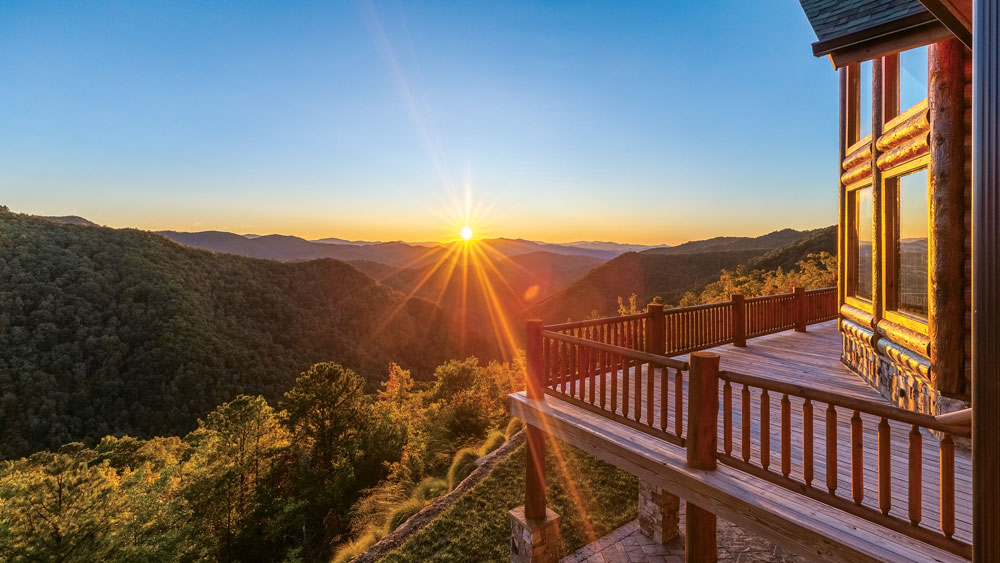 Turns out, there was only one “must” for John’s future retreat: “I really didn’t have a good idea of what I wanted except I knew I had to have that natural, rustic round-log look in every room,” he says. That single criterion was enough to lead him to local builder Alan Parcell with Mountain Vista Builders, who then connected him with Yellowstone Log Homes.
From there, the plan unfolded with ease … until it didn’t. “Yellowstone drew up plans for a house that was 8,000 square feet, but there was a hitch with the insurance company not wanting to cover a house that large due to the distance from the fire department,” explains Alan.
The team went back to the drawing board and achieved success on the second iteration, a modification of Yellowstone’s Breckenridge 2 plan with an added walk-out basement. Some highlights of the newly downsized 4,000-square-foot plan include a master bedroom on the main, a private balcony off the upstairs office and a wall of glass across the rear of the home.
Throughout the three floors, stand-out features include high ceilings, 100-year-old reclaimed wood details, custom made barn-wood furniture and Native American-inspired textiles. “The space gives me a sense of peace and relaxation,” says John.
Encompassing it all are the authentic, full-round logs — 10-inch-diameter, milled Swedish cope, to be exact — that were the sole essential in John’s home from the start. And, it’s those logs that still spark wonder nearly four years after John’s first weekend trip. “You’ll see a pattern in the wood or how the angles come together in a way you hadn’t noticed before,” he says. “There is always something new to find.” 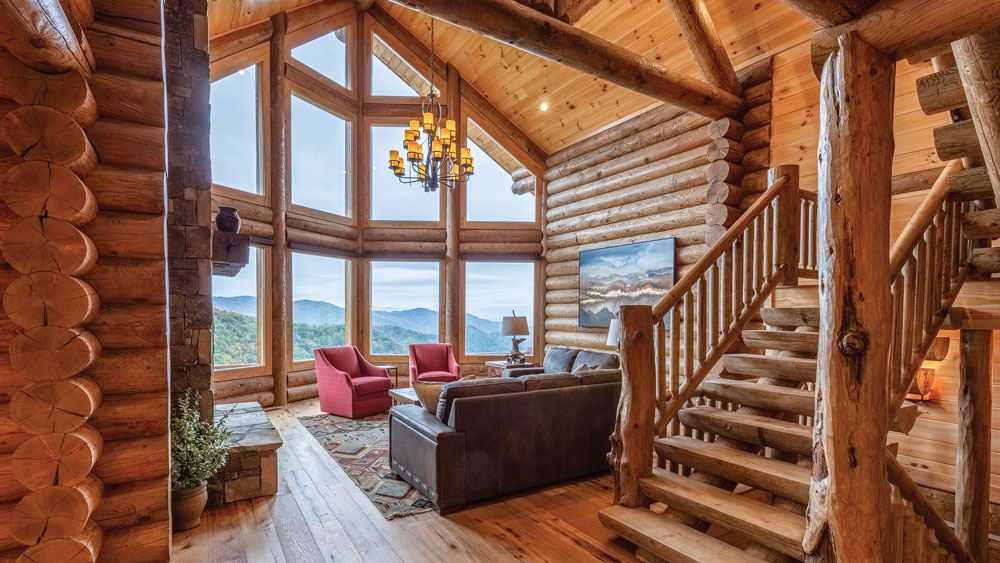 John’s appreciation of the logs is also due, in part, to what an adventure it was to get them from their origin in Rigby, Idaho, to the North Carolina site. “It was quite an exciting thing to haul logs that far across the country,” he says. Once the logs arrived in the area, Alan shuffled them from the staging area near the highway to the job site about 20 minutes away. “There were four large loads of logs delivered to a park-and-ride, then we offloaded them with a forklift onto smaller trucks that drove to the top of the mountain,” Alan explains.
Like the delivery of the logs, everything throughout the building process took a little extra time. “When you build up in the mountains, it is quite a feat, and you can’t do it quick,” John says. From breaking ground to move-in day, the process took just shy of three years. “We had a few good men building a very large house in a very tough spot, and so it took a while, but it turned out absolutely perfect,” he shares.
Clearly, that extra effort getting the logs up the mountain and erecting a hilltop home was well worth it for John. And now, the same goes for his seven-hour trek from the coast to the mountains. “Every time I walk in, ‘wow’ is the only word that comes to mind,” he says. “When you see a well-built log home, it takes your breath away.”