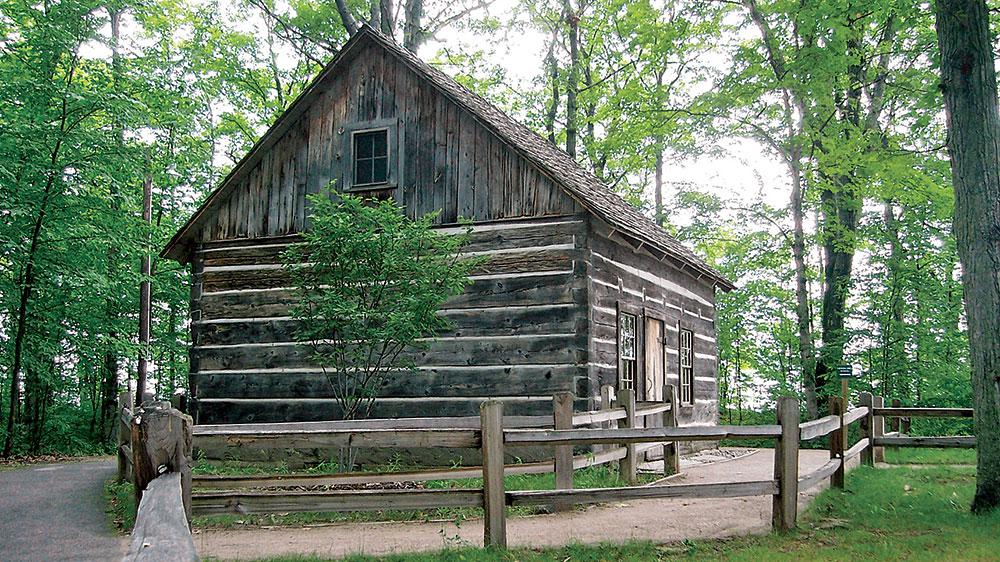 Michigan isn’t a state outsiders usually associate with log cabins. Settlers who marveled at the pine and cedar forest they found there, however, started a long, proud log-building tradition. Today, it’s the only state that holds a yearly festival to honor its pioneer dwellings.
Log Cabin Day began in 1987 as part of Michigan’s sesquicentennial celebration “to commemorate log cabins and the important role they played in this state’s earliest days,” according to the Legislature’s joint proclamation. Seven cabins, all in Berrien County, participated. Organizers of the event revived and expanded it two years later as an annual occasion, held the last Sunday in June. On this year’s Log Cabin Day, June 26, more than 100 log buildings, some dating back three centuries, will open their doors. A few are already open because they’re public buildings, mostly museums, but even owners of private cabins and contemporary log homes signed up to greet visitors. Some homes are closed but may be viewed from the highway. Admission to the open ones is generally free.
The oldest cabin on the tour was built in 1780 on Mackinac Island and features square logs and French-Canadian notching. At least seven of the cabins were built before 1830. The newest are milled and handcrafted log homes built within the past few years, most using the same native trees that Michigan’s settlers found so accommodating.
See also Does the Shape of Logs Matter?
Some stops add ceremonies and festivities to the celebration, including parades and crafts fairs. Log Cabin Day organizer Virginia Handy is encouraging events to tie in with the Civil War sesquicentennial.
Because the log landmarks are spread throughout the state, including a dozen in the vast Upper Peninsula, visiting them all in one day is impossible. To plan an itinerary that lets you get the most from your trip, you’ll find locations and descriptions of participating cabins in a brochure from the Log Cabin Society of Michigan, which sponsors the event. The non-profit LCS was incorporated in 1988 “to discover, preserve and promote log cabins in Michigan.” Besides ensuring the success of Log Cabin Day, the LCS works year round, attending school and other community events, to create awareness of and interest in Michigan’s log-cabin heritage.
Despite the society’s diligence in chronicling Michigan’s cabins, Handy reckons unrecognized others still stand. Added to the 2008 tour, for instance, was a newly discovered cabin, built in 1940 in Benton Township. What distinguishes this 500-square-foot building is that its logs were placed vertically, stockade style, rather than stacked horizontally.
See also What Make the Perfect Log Cabin Kit?
As new cabins turn up, however, others risk ruin both from exposure to Michigan’s harsh winter weather and from neglect. Examples are an old cabin in Dowagiac, described as “returning to nature,” and a log cabin built in 1885 for Sen. Thomas W. Palmer that is the only one in Detroit. At last reports, the Palmer place had lost its chinking, exposing its interior to the elements. The loss of the Palmer and Dowagiac cabins seems as inevitable as it is lamentable, given Michigan’s economy and society’s priorities.
If nothing else, Log Cabin Day offers one last chance to see many venerable log buildings. Much more than that, though, it affords the opportunity to marvel at those that endure and recall a time when log cabins were as essential to survival as food and water.
For a brochure and map of cabins participating in this year’s event, send $1 and a self-addressed stamped envelope to the Log Cabin Society of Michigan, 3503 Rock Edwards Drive, Sodus, MI 49126. For more information, visit their website.
★

Hand Hewn: The Traditions, Tools, and Enduring Be…
Shop now at Amazon.com