Preserving family tradition is the cornerstone of this Texas log home.

This Texas log home sits on a hill overlooking a marshy, wetlands area on one side and a 25-acre pond on the other. "Monte Walsh" is the bittersweet story of two cowboys near the close of the 19th century who are experiencing the decline of the cowboy way of life. In the movie version, one of the cowboys, Chet, tries to justify his decision to take a town job. He tells his partner, "Nobody gets to be a cowboy forever, Monte." That may have been true in the story, but not for log home owners Monty and Alice Stanley, who steadfastly maintain the ranch lifestyle they love. "Cattle, horses, border collies and kids—these are the priorities at Double S Ranch—in that order," jokes Monty about the log home getaway he and Alice have built. Monty is a principal of Satterwhite Log Homes, a log home manufacturer and builder and, therefore, had a pretty good idea of what he wanted in a second home. He designed the floorplan and oversaw construction. Located a bit northeast of Longview, Texas, the log home and adjacent cookhouse sit on a hill overlooking a marshy, wetlands area on one side and a 25-acre pond on the other. The residence is surrounded by Monty's piece of an old family ranch. He is proud to report that parts of that ranch have been in his family for 120 years. The house itself sits a half-mile or so back from a farm-market road. It enjoys plenty of privacy for rough-and-tumble sabbaticals, but it's also a true working ranch. "We run anywhere from 700 to 1,000 head of cattle a year here, including yearling calves," boasts Monty. "Plus we have horses and raise and train border collies, including one older dog that's been retired to the house." The dogs are not just a hobby; they're used to herd the cattle. And the Stanley kids?three boys, ages 2, 7 and 9?are all learning to work the ranch. They've just begun to get the hang of roping and each has his own registered brand, which the family uses on the livestock. Because the ranching life is a cherished family tradition, it is one that the Stanleys want to continue. "Cattle has been raised on this land for generations?mostly by someone from the family. We wanted our part of it to be a real family-run operation as well," Monty relates. It's not much of a chore for them to take care of the cattle business since the acreage is only about 15 minutes from the Stanleys' primary residence. The need to sustain continuity and traditional values colored how Monty and Alice designed their log home. It's small for a family of five?only 1,200 square feet, not including a 1,000-square-foot enclosed porch. Monty says it was intentionally kept diminutive to force the family outside as much as possible.

He felt it was important to encourage his kids to pursue outdoor activities when at the ranch, rather than staying inside watching television or playing video games. Since this is a second home, used on weekends and vacations, the Stanleys weren't overly concerned with storage space. "Besides," Monty points out, "there's a barn adjacent to the house, so we can use it for storage if we need to."

How It Came Together

The logs used for the home are 5 1/2-by-5 1/2-inch Engelmann spruce, with butt and pass corners. They were harvested from dead standing timber and as a consequence their moisture content was quite low, making for easier construction and fewer problems with settling. No chinking was used, either inside or out, giving the home a real Western ambiance. Interior walls are flat and log surfaces on the outside are rough, not milled. Deep porches on two sides help protect the logs from sun damage and deflect moisture when it rains. The other two exterior walls are sided with river rock brought in from Oklahoma. The rugged wood trim in the interior comes with a story. Monty's grandfather (who gave the Double S Ranch its moniker) ran a sawmill on the property after World War II and built many of the barns that once dotted the property. The wood for those barns was milled from logs pulled from the Sabine River?logs that had been cut by slaves in the 1800s. Having been submerged and, therefore protected from air, the logs had not rotted. Because those barns had been in the family anywhere from 50 to 75 years, Monty wanted a historical reminder of them and so used pieces of the barnboards as trim throughout the house. Also one old door near the front entry came from a barn in Indiana. Bedrooms (there are two?one upstairs and one down) were kept utilitarian in size, with the main body of the house devoted to the common gathering areas: an open kitchen and a commodious living area. Plenty of windows with views all around make the cozy space seem lighter and more spacious than its actual area might suggest. Monty points out one of his favorite things in the home?a 12-foot glass door that offers views down the hill. The living area is also warmed by a hearth, fashioned from the same river rock that dresses the two exterior walls. A hand-hewn ladder reaches to the upper level, the only way to access that space. A half-bath and a sitting room/game area are also contained on the upper level. Floors are stained concrete, which is an easy-to-care-for choice and perfectly comfortable in a warm climate like Longview's. Bright throw rugs help soften the effect and add a touch of color. They coordinate with the home's cushy yet functional furnishings and ranch decor. Western appointments complement the theme: Mounted antler racks, an old bridle, a pair of spurs and well-worn chaps are part of the collection. Though the kitchen is small, it adequately serves the needs of the family. It contains all the necessary accouterments, including mesquite wood cabinets that Monty says are extremely heavy. The front door is constructed of the same mesquite wood, giving it a good solid feeling. Enhancing the casual livability of the modest main house, the cookhouse allows the Stanleys to entertain with style. It sits only a short distance away, and measures approximately 800 square feet, which is enough space, according to Monty, to feed and entertain 20 to 30 people easily. What he especially likes about the cookhouse is that he and Alice can handle food preparation while visiting with the guests. The Stanleys chose a 48-inch gas grill for real Texas barbecues, plus an oven, cooktop, sink and refrigerator. The only appliance left out was a dishwasher, which Monty admits was an oversight. Except during the most brutal summer months, the screened cookhouse remains fairly cool, aided by ceiling fans. The Western theme is carried through here, and includes three bar stools made from saddles, some of which were once used at the ranch. Monty attached them to barber-chair bases so that they adjust easily up and down for the kids. Would Monte Walsh have been comfortable on the Double S? You'd have to think so. In fact, he may have been as proud as the Stanleys to call it home away from home. For resource information, see the September 2003 issue of Log Home Living. 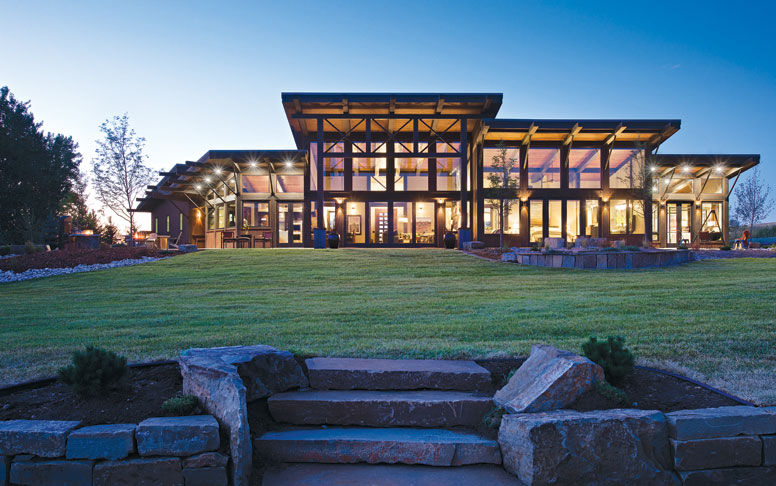 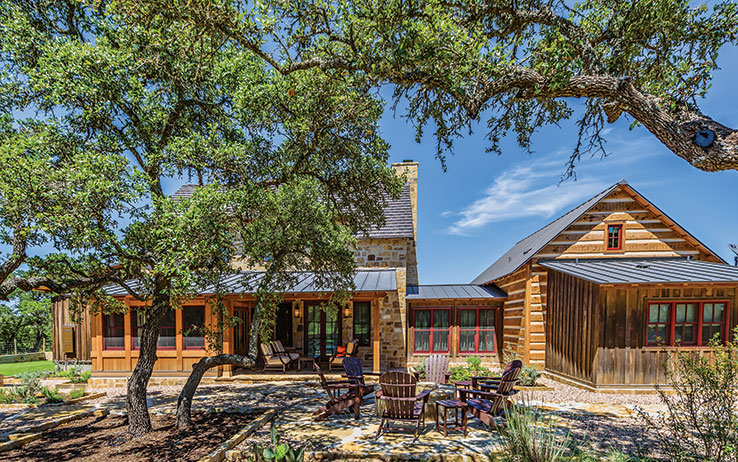 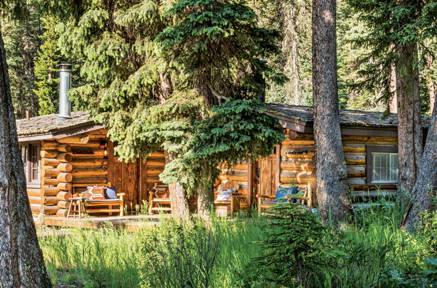