Everything New Is Old Again: A Maryland Log Home

Nostalgia meant everything for the design of a 4-year-old log home in Maryland that has a centuries-old heart.

Ken and Nancy Walker were thrilled at the prospect of designing and building a brand-new log home—as long as the place didn't look that way. Upper-level dormers along with skylights for the bedroom above the garage ensure that the second story of the Walkers' home gets plenty of light.

"I wanted something that looked like a farmhouse that had been discovered and expanded over the years," says Ken, a general contractor who built his Myersville, Maryland, home in 2005. "Nancy had an appetite for the same thing, so she did the floor plan and became very much like the clients I work for."

Luckily, this particular builder-client relationship was especially strong, and Ken and Nancy have the 4,500-square-foot showstopper to prove it. But what their five-bedroom, four-bath home doesn't have is much evidence of its 21st-century birth date. Instead, it boasts timeless, honeyed wood and rustic refinement throughout, along with an impressive array of styles that comes together in one gorgeous, cohesive whole.

"But it's seamless," he continues. "You have no sense of going from one structural system to another." Along with Ken and Nancy's savvy design, the credit for the flawless, old-meets-new continuity goes to the unique profile of the eastern white pine logs provided by Tennessee-based Hearthstone Homes.

"Ken used the Bob Timber-lake log profile, which follows the natural taper of the tree," says Chris Wood, the company's vice president of sales. "It's not a milled, rectangular shape. It has an irregular top and bottom surface."

Along with chinking and a dovetail system, adds Chris, this irregularity is what creates the home's centuries-old appearance. And it's the pine itself that makes it look so spectacular, not to mention surprisingly bright.

"In log houses, one of the issues is that the wood can make things so dark," says Ken, now a distributor for Hearthstone. "At times during the day, though, you almost squint because of all the light coming in."

Of course, visitors may just be squinting at the sheer beauty of the home's soaring, 26-foot-tall great-room ceiling, the rugged massiveness of its dry-stack stone hearth or even the been-there-forever look of the distressed wide-plank oak floors.

"If you don't do something to protect the humidity, boards that wide will cup. Well, I put them in specifically to get them to cup," says Ken. "And when I finished them, I ran over everything with a disc sander. It had the effect of putting saw-blade patterns in the wood." In other words, he made sure his brand-new floors looked—what else?—really, really old. 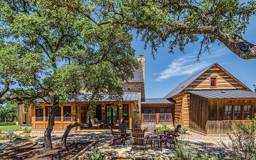